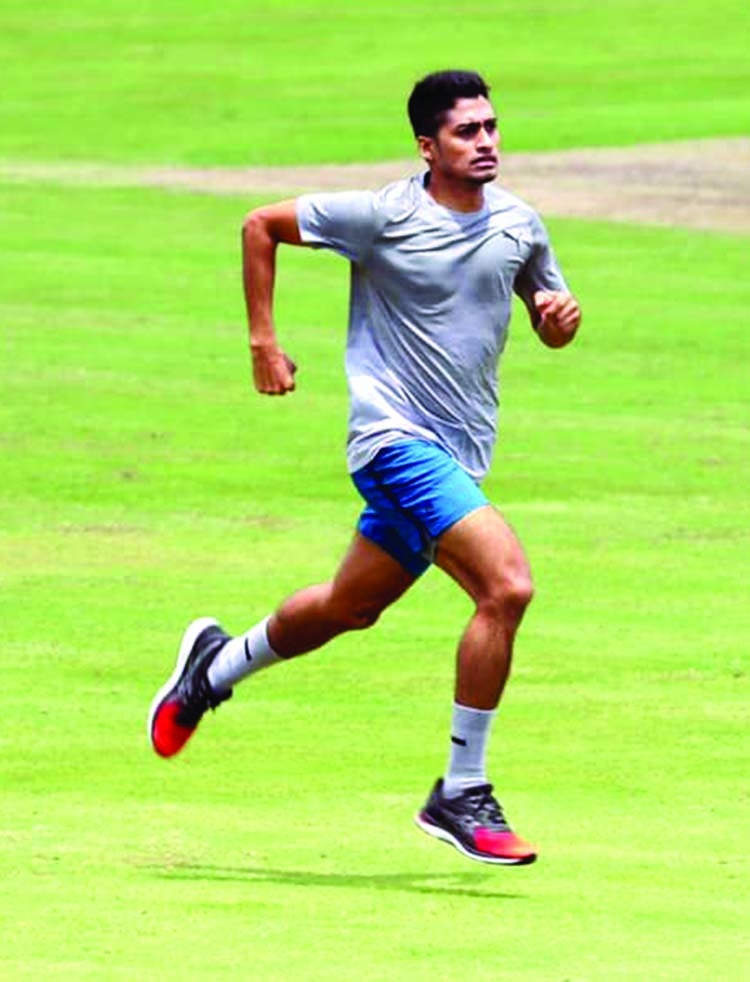 The first-phase of Tigers' one-to-one individual training which started on July 19 for the first time post-lockdown will come to an end today. Nine Bangladesh national cricketers earlier returned to action on last Sunday with one-to-one individual training sessions following the Bangladesh Cricket Board (BCB)'s latest guidelines.
After the Sher-e-Bangla National Cricket Stadium (SBNCS) in Mirpur reopened on last Saturday to Bangladesh cricketers' individual training where Mr. dependable Mushfiqur Rahim, Mohammad Mithun and pacer Shafiul Islam first started one-to-one training. Left hand batsman Imrul Kayes then officially started training from last Monday in Mirpur while fast bowler Syed Khaled Ahmed, left-arm spinner Nasum Ahmed, all-rounder Mehidy Hasan Miraz, wicket-keeper batsman Nurul Hasan and Nayeem Hasan trained in their home district. Later Pace duo Taskin Ahmed and Mehedi Hasan Rana showed their interest to use the Mirpur ground and joined practice session as per BCB rules.
Left arm pacer Mehedi Hasan Rana however started individual practice from Tuesday while Taskin backed in action on Thursday.
Off-spin all-rounder Miraz who is using the Sheikh Abu Naser Stadium (SANS) in Khulna for training said on Saturday he is preparing himself for the upcoming cricket schedules through individual practice.
"After a long time I got a chance to come to the field and practice. I think the current difficult situation will get better soon. I am currently working on fitness. I was staying at home last three months, I couldn't do anything (practice). Now this is a good opportunity. As a result, I am trying to maintain my fitness as much as possible. I cricket will restart very soon." Miraz said in a video message.
But Mr. dependable Mushfiqur Rahim stunned everyone on Saturday by rounding Sher-e-Bangla National Cricket Stadium (SBNCS) record-breaking 14 times non-stop.
After Mushfiqur's non-stop running, Mohammad Mithun batted for one hour after half an hour running. Imrul also did batting practice but he focused gym and running session. As per BCB's schedules, pacer Mehedi Hasan Rana was the last man to practice at SBNCS. He just spent 45 minutes for running.
As pacer Shafiul returned to his home district of Bogra yesterday, he has practiced in Bogra under the management of BCB. Due to bad weather, national cricketers had to use the indoor facility at the Sher-e-Bangla National Cricket Stadium last week. The second phase of Tigers' one-to-one individual training will begin after Eid vacation. A number of cricketers are expected to join training after Eid-ul-Adha.
BCB is planning to hold a five- to six-week training camp for national pool cricketers after Corona fears subside. According to BCB, the BCB's foreign coaches who are now in their respective countries because of Corona will back in business for Bangladesh if the situation improves. Once the corona is well they will move on a short notice and will have full practice in their management.
All cricketers are training at four venues-Sher-e-Bangla National Cricket Stadium (SBNCS) in Mirur, Zahur Ahmed Chowhdury Stadium (ZACS) in Chattogram, Sylhet International Cricket Stadium (SICS) and Sheikh Abu Naser Stadium (SANS) in Khulna.
Due to worldwide corona outbreak, a number of international home and away tours and competitions as well as domestic events have seen postponements and players was forced to stay home. Bangladesh cricketers however, were remained busy mainly with individual fitness programmes.