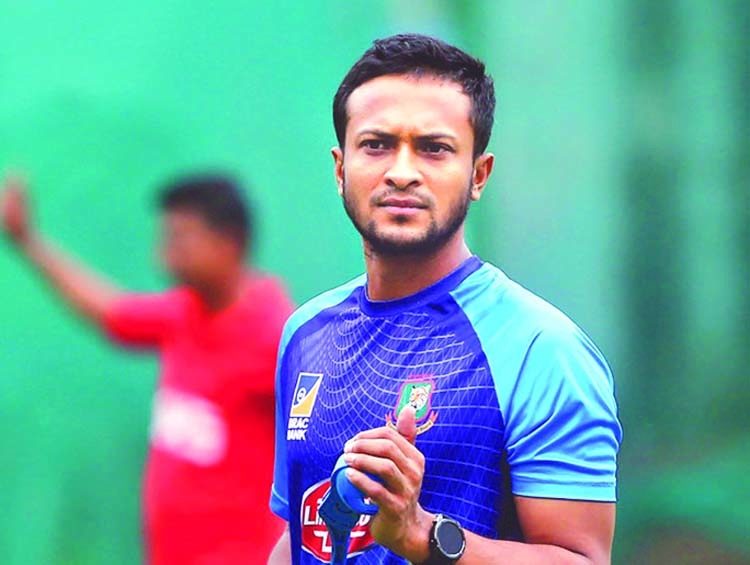 Bangladesh ace all-rounder Shakib Al Hasan has planned to begin his practice session in next month in a bid to keep him 100 percent fit for playing cricket, report BSS.
Shakib's ban will be lifted on October 29, opening up a window for him to play International cricket once again. Albeit he was given two-year ban due to his failure to report the corrupt approaches by bookies, one year of that ban was suspended. The one suspended ban means, he is free to play cricket after one year but ICC will keep him under tight scrutiny in the next one year.
Even though there is still three months left to lift his ban, Shakib wants himself to prepare completely as Bangladesh has the chance to play a three-match Test series in Sri Lanka in October-November. The three-match Test series, which was the part of ICC Test Championship and scheduled to be held in August was postponed due to the COVID-19 pandemic. But it has the chance to be rescheduled.
Shakib, however, is eying that series as the window of that series is opened due to the postponement of ICC T-20 World Cup. "I'm keen to back to the practice pit from next month," Shakib said during a videocast with ESPN Cricinfo.
"I'll get three months to prepare myself with intense practice. I haven't been doing anything in those months. But I think three months are enough to make you fit and bring you back in your previous fitness position. For the time being it's the plan."
Shakib who is now with his wife and two daughters in USA, revealed that he would celebrate the Eid-ul-Azha with his family before starting his practice session. His family sources said Shakib is keen to have his individual training in England and he contacted his BKSP teacher Salahuddin and Pakistan former off-spinner Saqlian Mustaq to supervise his training session.
In a similar manner, Shakib trained under Salahuddin in Hyderabad during the IPL to keep him prepared for the World Cup. And his individual training paid rich dividends as he completed a groundbreaking tournament. He ended with third highest 606 runs and 11 wickets, making him only person in World Cup history to complete a double of at least 500 runs and 10 wickets.
Meanwhile, Shakib has been in constant touch with his father Mashrur Reza and mother Shirin Reza, both are contracted with COVID-19. Family sources said that their condition is stable.