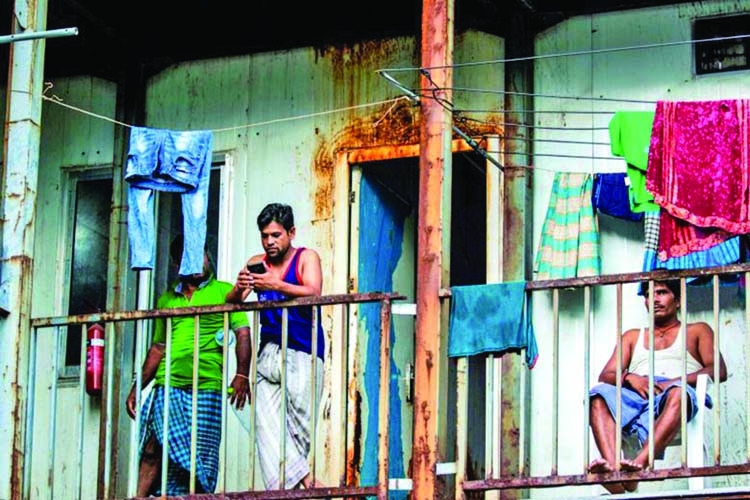 The majority of coronavirus infections have been among Bangladeshi workers who often live in squalid conditions. -AFP
Human Rights Watch on Saturday urged the Maldives to drop charges against 80 migrant workers arrested for demanding their unpaid wages in a country otherwise known for its upmarket tourism.
The New York-based group said authorities detained the foreign workers during separate demonstrations against inhumane living conditions and work without pay. "The authorities should drop charges and release all those held for engaging in peaceful protest, and address allegations of human trafficking and other abuses...," HRW said in a statement. Workers in the construction sector had not been paid even before the country went into coronavirus lockdown in March, according to officials.
Sporadic clashes erupted since May. Bangladeshi worker Mohammad Mohsin told AFP by phone that clashes with police broke out two weeks ago as they had not been paid for six months.
"Our families are dying at home starving and being hunted by loan sharks," Mohsin said, referring to many borrowing money to travel to the Maldives in search of what they believed would be well-paid jobs. Police confirmed they arrested 41 migrant workers at Hulhumale, just outside the capital on July 13. There had been several other arrests elsewhere bringing the total number detained to just over 80. HRW said Male was invoking national security and banning protests to deflect from its failure to curb abuses against migrant workers.
"Instead of suppressing protests, Maldives authorities should address and remedy the violations of migrant workers' rights that are spurring people to the streets," HRW director Patricia Gossman said.
Police said they advised workers "not to resort to violence in the name of industrial conflicts."
There was no immediate government reaction to the latest HRW statement, but responding to concerns earlier this month, the Maldivian foreign ministry said it acknowledged the "unjust treatment" of foreign workers in the nation of 340,000 people.
"The government accepts significant reform is required to redress these grievances... (but incidences) where individuals have resorted to violence have been deeply alarming, and will not be further tolerated," it said.
The atoll nation which is better known as a hotspot for well-heeled honeymooners closed its international borders in March to contain the spread of the coronavirus which has infected 3,175 and killed 15.
The majority of infections have been among Bangladeshi workers who often live in squalid conditions on the highly congested capital island.
The Maldives reopened its international borders to tourists on July 15 as the country lifted most of its lockdown measures.