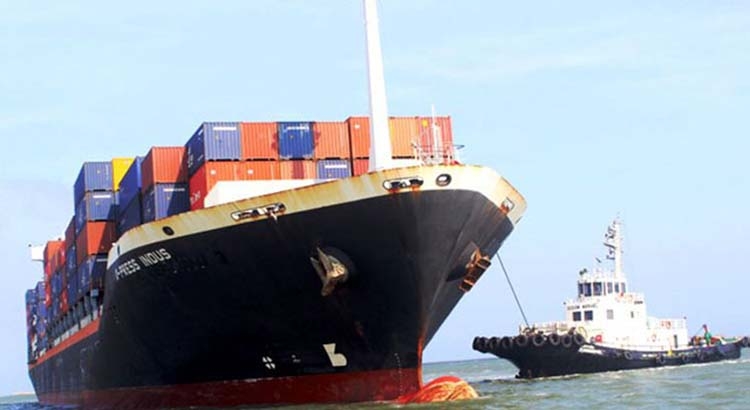 India-Bangladesh cargo service has elevated the economic bonds of the two countries to new heights.
When Tripura received its first consignment of cargo from Kolkata via the Chattogram port of Bangladesh on Thursday, it marked the revival of a historic route that had been in disuse for over a century.
With the first trial run on this route completed successfully, India is hoping it will mark the beginning of an arrangement that will not only provide better connectivity to the northeast using the maritime route but also prove beneficial to both countries.
Bangladesh Prime Minister Sheikh Hasina’s visit to India in October 2019 was a positive step in the relationship between India and Bangladesh and the biggest highlight of relations between Delhi and Dhaka in 2019.Despite some pending issues, at present, Indo-Bangla relations are at their historical best. The two countries must build on this and move forward.
The seven pacts and three projects that were signed and finalised during the visit of PM Hasina highlight the transformation of the relationship between the two countries. India and Bangladesh are now a model of good neighbourliness —the agreement to supply gas to Tripura, and the use of the Chattogram and Mongla ports to serve the north-east states is a result of the goodwill between the two countries. The agreement for a skill development centre in Bangladesh to train the youth is another example of strong ties.
The main aspects of the India-Bangladesh Joint Statement during the official visit of Prime Minister of Bangladesh to India on 5 October, 2019 are efforts on border security and management, and how both countries are working towards a win-win partnership. These points include closer coordination between border forces to bring down the loss of civilian lives; simplifying people-people movement and entry/exit in checkpoints at Akhaura (Tripura) and Ghojadanga (West Bengal); closer cooperation against extremist and radical groups, terrorists, smugglers, smuggling of fake currency, and organized crime; a bilateral Comprehensive Economic Partnership Agreement, discussions on Integrated Check Posts; enhancing cooperation in the area of disaster management; withdrawal of port restrictions traded through Akhaura-Agartala port; discussions on anti-dumping / anti-circumvention duties imposed on multiple products, including on just products, from Bangladesh to India; and increasing the number of Border Haats to 12.
Other efforts such as to boost connectivity over all through the BBIN Motor Vehicles Agreement, and to strengthen railways, buses and flights connectivity; the signing and implementation of the Framework of Interim Agreement for sharing of the Teesta waters; an early start of the work on withdrawal of 1.82 cusec of water from Feni River for drinking purpose of the people of Sabroom town of Tripura; harnessing defence cooperation; consolidating development cooperation; energy cooperation; education and youth exchanges; cultural cooperation; and joint efforts to assist forcibly displaced persons from the Rakhine State of Myanmar.
Other highlights of 2019 was PM Hasina’s visit to Kolkata for the Test match and new Indian Foreign Minister’s visit to Dhaka after taking charge. Bangladesh President attended PM Narendra Modi’s swearing in ceremony in May 2019. Apart from this there were several high level visits between the militaries of the two countries.
In 2019 India has agreed to train Bangladeshi bureaucrats. Bangladesh is in the process establishing a Deputy High Commission in Chennai. In her recent trip to India, PM Hasina has also indicated her willingness to invite Indian investment to Bangladesh to construct pipelines for LNG.
Bangladesh is all set to graduate out of the Least Developing Countries. India’s continued partnership with Bangladesh benefits both countries. New Delhi must keep up the partnership that allows for economic growth and improved developmental parameters for both countries. The strong mutually beneficial partnership between India and Bangladesh must deliver on its promise. It is welcome that the government has assured Bangladesh that the National Register of Citizens will not affect Bangladesh. It is important to address specific issues like Teesta and to respond to Dhaka’s call for help on the Rohingya issue.
Bangladesh, with a population of 160 million (eighth most populous country in the world), has achieved 7-8 percent growth in recent times. The country will also be eligible to graduate to developing status from its Least Developed Country (LDC) status by 2024, and with a huge market. Prime Minister Hasina who has asserted her strength to handle complex issues far better than her predecessors.
PM Hasina banned the Bangladesh Jamaat-e-Islami party. Under her leadership, Bangladesh set up an international tribunal to investigate and prosecute suspects for the genocide committed in 1971, in which 3 million people were killed. PM Hasina prosecuted those who aided Pakistanis and massacred intellectuals. In 2019 PM Hasina also took strong steps against terrorists who attacked Holy Artisan Bakery.
Efforts to eliminate JMB which aims to create an Islamic state have been strengthened. In this context, it is noteworthy that the Supreme Court upheld secularism as a state principle within the constitution in 2010.
PM Hasina has respected rulings of the Maritime Boundary Arbitrations, and positive steps have been taken with PM Singh and PM Modi to address the boundary issue. In addition, since 2017, Bangladesh has provided refuge to nearly 11 million Rohingya from Myanmar and is building homes in Cox's Bazaar for them.
Several steps related to social empowerment, domestic economic measures and trade by PM Hasina’s government have led to 7-8 percent economic growth. For instance, the provision of concessional duty free access has allowed the export of Bangladesh garments to overtake India and China.
There has been large scale employment of women, including in the textile industry. Grameen Bank has become an international movement, and mobile banking has become popular. Bangladesh is also doing well on the Ease of Doing Business rankings. With respect to India and West Bengal, PM Hasina has strengthened mutually beneficial trade.
India is hopeful that it will benefit Bangladesh in the following ways.

a)    Fresh investment flow in the logistics sector

b)    New trade routes are expected to generate employment and give a fillip to transport, finance and insurance.

c)    Generate revenue by way of administrative and port-related fees

d)    Lead to economic transformation of cities such as Cumilla, Tamabil and Akhaura as well.


The writer is a senior Indian
journalist. She has worked for
different major Indian newspapers.