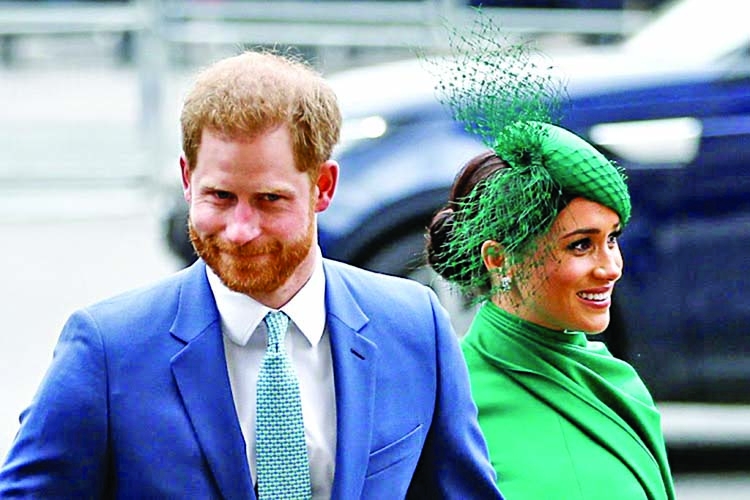 Prince Harry and wife Meghan blamed "viper" courtiers for widening their rift with the royal family, according to extracts from a new book published in The Times on Saturday, reports AFP.
The couple say they did not contribute to the new biography "Finding Freedom", written by journalists Omid Scobie and Carolyn Durand, but friends of the couple provided much of its content.
The book, serialized in The Times, will claim that Harry felt "unprotected" by his family, and lay bare his split from brother William and his wife Kate.
Kate even refused to make eye contact with her sister-in-law at their final engagement in March, according to the new release.
Harry apparently referred to senior courtiers as "vipers" who felt that the global popularity of the couple was overshadowing the family and "needed to be reined in", according to extracts.
The book, to be released on August 11, also suggested that Harry, 35, was the driving force behind the couple's move away from the family, with Meghan telling her husband that she "gave up my entire life for this family".
The couple now live in Los Angeles and were in the headlines this week for taking legal action against one or more paparazzi whom they accuse of taking pictures of their son Archie without permission.Pressure from tabloids has dogged Harry throughout his life, and he blames them for the death of his mother Princess Diana.
Meghan, 38, told a friend that tabloid criticism was like "death by a thousand cuts", according to the new book.The authors are sympathetic to the couple, and say the book will "correct the record" on the acrimonious split.However, it does acknowledge that Harry and Meghan's decision to keep the family in the dark about their plans "created a lot of ill will".