What makes Islamabad so eager about Dhaka? 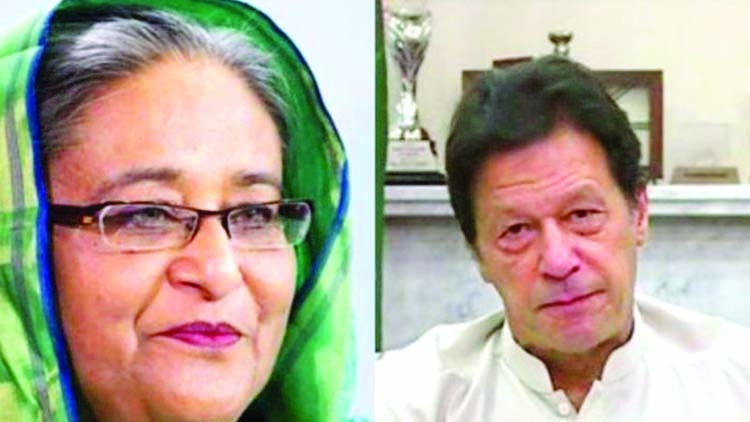 Pakistani Prime Minister spoke to his Bangladrshi counterpart Sheikh Hasina on Wednesday over telephone for twenty minutes. This matter is currently the most discussed geopolitical issue in South Asia.
Imran Khan's telephone conversation with Sheikh Hasina has surprised everyone because of Bangladesh's strong and friendly ties with India while relationship between Bangladesh and Pakistan is not so warm, reports BBC Bangla.
The Nation, one of the leading daily English newspapers of Pakistan has referred to the telephonic dialogue between Sheikh Hasina and Imran Khan as 'dawn of a new era' in a commentary.
Now questions have come up what makes Islamabad so eager about Dhaka. It may be recalled that Pakistan Parliament slammed Bangladesh in 2016 for conducting war crime tribunals. Some foreign affairs analysts have remarked that Bangladesh is rather worried about India's Citizenship Amendment Act.
Former Chief Minister of Pakistan's Punjab Hasan Askari Rizvy told BBC that Imran Khan came to power in 2018 and since then he has been interested to improve ties with Bangladesh. Hasan Askari Rizvy further said that Pakistan's relationship with India is getting worse day by day. For this reason Imran Khan wants to upgrade ties with other South Asian countries.
Express Tribune, another Pakistani newspaper wrote that this telephonic conversation took place through silent diplomacy but it had been in preparation for several months. Pakistani High Commissioner to Bangladesh Imran Ahmed Siddiqui had a meeting with Foreign Minister AK Abdul Momen on July 1. The decision of holding a telephonic conversation between Sheikh Hasina and Imran Khan was made in that meeting, according to Express Tribune.
Hasan Askari Rizvy commented that the alliance between Bangladesh and India has been strained to some extent due to India's Citizenship Amendment Act and National Registry of Citizens (NRC) in Assam. This phenomenon might have generated hope in Imran Khan's mind about getting closer to Bangladesh, Hasan Askari Rizvy added.
The Nation has written that the close cooperation between China and Pakistan has become the hub of Asia's economy and politics. Under these circumstances Pakistan's efforts to widen ties with Bangladesh is nothing unnatural.
Nevertheless, it is not yet clear how much lenient Pakistan can become regarding issues like apologizing for the genocide Pakistan forces committed on the soil of Bangladesh during 1971.
Pakistan holds the opinion that moving forward is a better option rather than looking back.