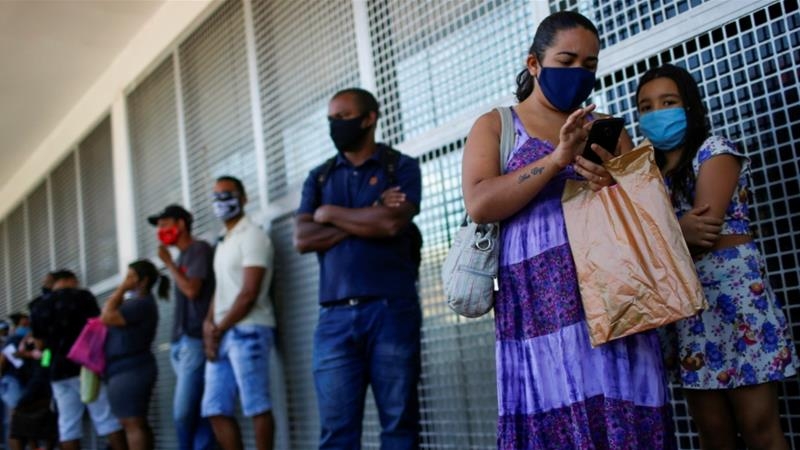 Brazil is being battered by the coronavirus crisis, but the damage is uneven across the sprawling South American country, where experts say chaotic policy-making has only made a complicated situation worse.
Like the United States – the only country that has recorded more infections and deaths in the pandemic – Brazil is a continent-sized giant with myriad regions and sub-regions, held together by a federal system that can breed a confusing cacophony of national, state and local policies even at the best of times.
The national statistics on the new coronavirus – more than 2.3 million infections and 85,000 deaths – mask a varied panorama across the country of 212 million people.
"It's very heterogeneous," said Marcelo Gomes, of leading public health research institute Fiocruz.
Brazil's 27 states are all facing different epidemics. Even within states, "things can change a lot from one region to the next," he told AFP.
Nationwide, the curve of daily COVID-19 deaths in Brazil has been in a long plateau since June, albeit in a very high range.
At the state level, things are murkier.
On average over the past seven days, four states posted declining daily death tolls, including once-devastated Amazonas in the north and Ceara in the northeast.
Ten had rising numbers, including in the south and west-central regions, which had been less affected until recently.
And 13 were basically stable, including Sao Paulo and Rio de Janeiro, the two hardest hit states.
In some states, including Ceara and Rio de Janeiro, there is talk of a "second wave, even though the first wave never really tapered off," said Gomes.
President Jair Bolsonaro has downplayed the pandemic, comparing the virus to a "little flu" and the reaction to it "hysteria."
The far-right leader, who regularly defies social distancing guidelines, tested positive for the virus himself on July 7 after developing a fever and fatigue.
On Saturday, after spending neraly three weeks in self-isolation at the presidential palace, he said he had tested negative for the virus – crediting his controversial use of the anti-malarial drug hydroxychloroquine, whose efficacy against COVID-19 has not been proven.
Amid Bolsonaro's attacks on stay-at-home measures to contain the virus, the Supreme Court gave state and local authorities the final say in the matter.
But states and municipalities have imposed an inelegant hodge-podge of quarantine measures, with little in the way of enforcement and a widespread lack of adherence.
That has been followed, in some cases, by poorly designed policies to reopen the economy, which many experts have deemed premature.
Brazilians are also split by huge socioeconomic and regional divides. Private hospitals in the wealthy industrial cities of the southeast look nothing like public ones in the poor north and northeast.
The World Health Organization said last week Brazil finally appeared to have reached the plateau, urging it to use the occasion to take control.
"We're still a long way from that. It's not that we're not seeing the light at the end of the tunnel. We can't even see the tunnel," said Jose David Urbaez, an infectious disease specialist at Asa Norte Regional Hospital in Brasilia.
"If Bolsonaro's attitude were different, if there were a coordinated central response, the situation would be a lot different," he added.
"This diversity of situations is more down to management chaos than the actual epidemiological picture. We could have had a single quarantine for everyone, with different layers and timing adapted to each region." - AFP