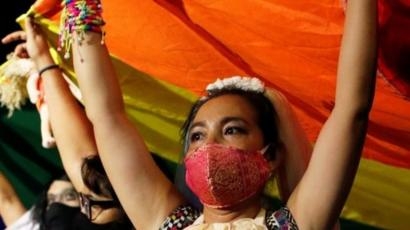 Hundreds of Thai gay activists have raised rainbow flags in Bangkok during a pro-democracy rally in the capital.
They danced and sang in the city centre, where police were deployed. There were no reports of any violence.
Saturday's rally was the latest in a series of youth-led protests calling for the government to resign.
General Prayuth Chan-ocha seized power in a coup in 2014, and was later named as prime minister by the military-appointed parliament.
"We're here today mainly to call for democracy. Once we achieve democracy, equal rights will follow," a young protester told Reuters.
He said that LGBT groups in Thailand "do not yet have equal rights in society, so we're calling for both democracy and equality".
In recent days Thai pro-democracy activists have been defying a government ban on public gatherings amid an ongoing coronavirus outbreak in the country in south-east Asia.