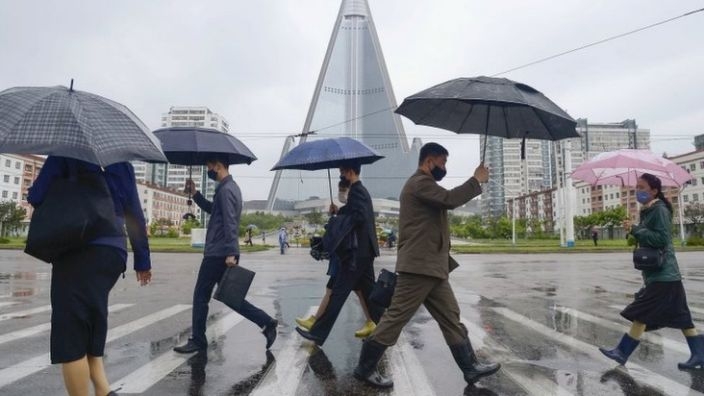 North Korea has reported what it describes as the country's first suspected case of coronavirus.
State news agency KCNA said a person who defected to South Korea three years ago last week returned across the demarcation line had Covid-19 symptoms.
Leader Kim Jong-un held an emergency meeting with top officials, imposing a lockdown in the border city of Kaesong.
North Korea, a secretive state, had earlier said it had no Covid-19 cases - but analysts say this was unlikely.
"An emergency event happened in Kaesong city where a runaway who went to the south three years ago, a person who is suspected to have been infected with the vicious virus returned on 19 July after illegally crossing the demarcation line," KCNA said.
At Saturday's politburo meeting, Mr Kim ordered a "maximum emergency system" to contain the virus.
KCNA added that Mr Kim also launched an investigation into how the person had managed to cross the heavily fortified border, warning those responsible that "a severe punishment" would be administered.
At the same time, South Korea has not reported of any illegal crossings of the demilitarized border in recent days.
North Korea closed its borders and put thousands of people in isolation six months ago, as the virus swept across the globe.
Earlier this month, Mr Kim hailed his country's "shining success" in dealing with Covid-19.