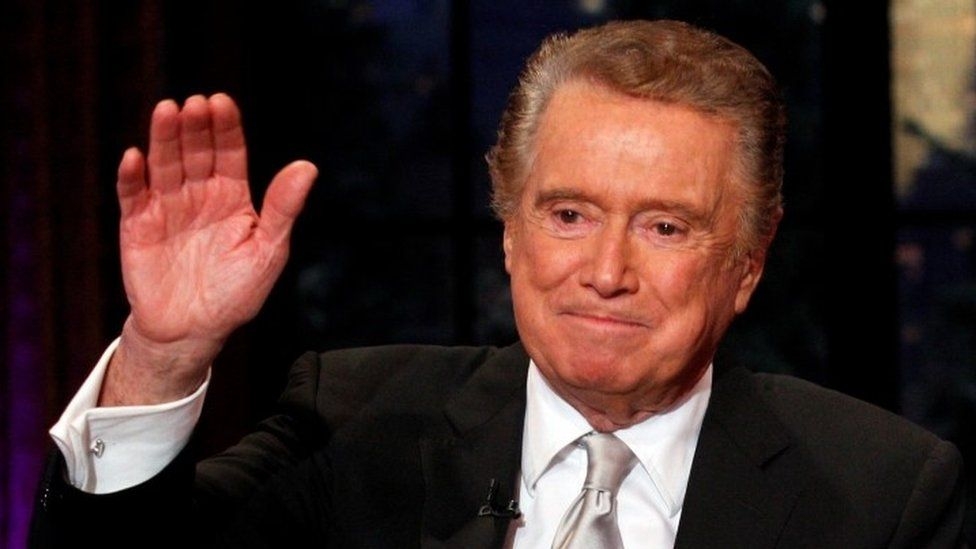 Veteran American broadcaster Regis Philbin has died at the age of 88, a family statement says.
The talk show host, actor and presenter started work in TV in the mid-50s, and became famous with the national talk show "Live! with Regis", first with Kathie Lee Gifford, then Kelly Ripa.
He announced in 2011 he was retiring from the weekday show, after he had hosted it for more than 25 years.
He also presented the US version of Who Wants To Be A Millionaire?
A family statement to People magazine read: "For his warmth, his legendary sense of humour, and his singular ability to make every day into something worth talking about. We thank his fans and admirers for their incredible support over his 60-year career and ask for privacy as we mourn his loss."
He died on Friday of natural causes, People said.
President Donald Trump tweeted his condolences, calling Philbin "one of the greats".
Regis Philbin was honoured multiple times in his career, taking home three Daytime Emmy awards, and a Lifetime Achievement.
He was inducted into the Television Hall of Fame in 2006 and received a Hollywood Walk of Fame star in 2003.
As he announced his retirement from Live! with Regis and Kelly, he said: "There is a time that everything must come to an end for certain people on camera - especially certain old people."
The New York City-born Philbin also presented the US version of Who Wants To Be A Millionaire and the first series of America's Got Talent.
A Guinness World Records entry says: "The most hours on US television is 16,746.50 hours by presenter Regis Philbin (USA) whose career spans 52 years as of 15 September 2011."
Talk show host Jimmy Kimmel tweeted: "Regis was a great broadcaster, a good friend and a tremendous amount of fun. He leaves behind a beautiful family and a TV legacy that will likely go unmatched."