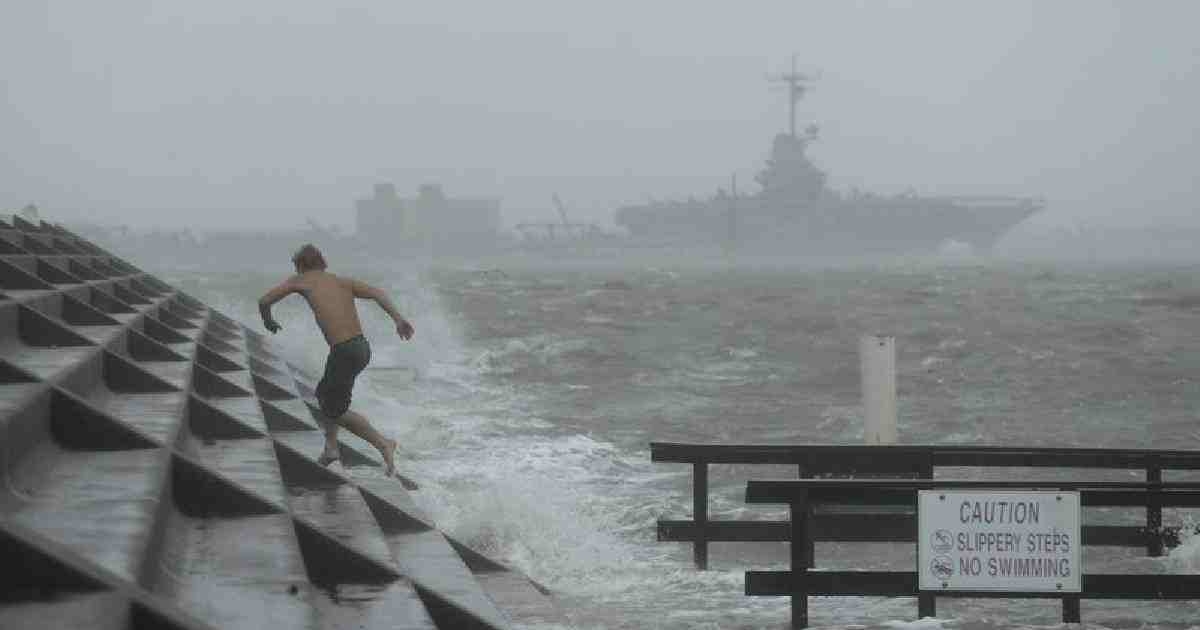 Hurricane Hanna, the first hurricane of the 2020 Atlantic hurricane season made landfall twice as a Category 1 storm on Saturday afternoon within the span of little over an hour in Texas.
The first landfall happened at around 5pm about 24 kilometers north of Port Mansfield, which is about 209km south of Corpus Christi. The second landfall took place nearby in eastern Kenedy County, reports AP.
Hanna had come ashore with maximum sustained winds of 145 kph. As of Saturday night, those winds had weakened to 120 kph.
Many parts of Texas, including areas near where Hanna came ashore, have been dealing with a surge in coronavirus cases in recent weeks, but local officials said they were fully prepared for the storm.
Chris Birchfield, a meteorologist with the National Weather Service in Brownsville, said residents needed to remain alert. While Hanna's winds were expected to weaken throughout Saturday night, the storm’s real threat remained heavy rainfall, he said.
“We’re not even close to over at this point. We’re still expecting catastrophic flooding,” Birchfield said.
Forecasters said Hanna could bring 6 to 12 inches (15 to 30 centimeters) of rain through Sunday night — with isolated totals of 18 inches (46 centimeters) — in addition to coastal swells that could cause life-threatening surf and rip current conditions.
Some areas in South Texas had reported receiving up to 23 centimeters. Rainfall totals were expected to rise throughout the evening and into Sunday. “It’s been all day,” Melissa Elizardi, a spokeswoman for Cameron County Judge Eddie Treviño, said of the rainfall.
In a tweet, President Donald Trump said his administration was monitoring Hanna, along with Hurricane Douglas, which was heading toward Hawaii in the Pacific Ocean.
Hanna came nearly three years after Hurricane Harvey made landfall northeast of Corpus Christi. Hanna was not expected to be as destructive as Harvey, which killed 68 people and caused an estimated $125 billion in damage in Texas.
First responders in Corpus Christi proactively placed barricades near intersections to have them ready to go if streets began to flood, Mayor Joe McComb said. More than 43,700 people throughout South Texas, including Corpus Christi, Harlingen and Brownsville, were without power Saturday evening, according to AEP Texas.
Corpus Christi is in Nueces County, where health officials made headlines when they revealed that 60 infants tested positive for COVID-19 from July 1 to July 16.
Farther south in Cameron County, more than 300 confirmed new cases have been reported almost daily for the past two weeks, according to state health figures. The past week has also been the county’s deadliest of the pandemic.
Coastal states scrambled this spring to adjust emergency hurricane plans to account for the virus, and Hanna loomed as the first big test.
South Texas officials’ plans for any possible rescues, shelters and monitoring of the storm will have the pandemic in mind and incorporate social distancing guidelines and mask wearing.
Gov. Greg Abbott said Saturday that some sheltering would take place in hotel rooms so people could be separated.
“We cannot allow this hurricane to lead to a more catastrophically deadly event by stoking additional spread of COVID-19 that could lead to fatalities," Abbott said.
Cameron County planned to open at least three evacuation shelters. Other counties and cities throughout South Texas had also opened shelters, with many requiring face masks.
Various resources and personnel to respond to the storm were on standby across the state, including search-and-rescue teams and aircraft. Mobile teams that can continue testing for COVID-19 were also being deployed.
Abbott said he has issued a disaster declaration for 32 counties in Texas and had asked the federal government to approve a similar declaration.
Tornadoes were also possible overnight Saturday for parts of the lower to middle Texas coastal plain, forecasters said. A hurricane warning was in effect for Port Mansfield to Baffin Bay, south of Corpus Christi, and a tropical storm warning was in effect from Port Mansfield south to Barra el Mezquital, Mexico, and from Baffin Bay north to Port O’Connor.