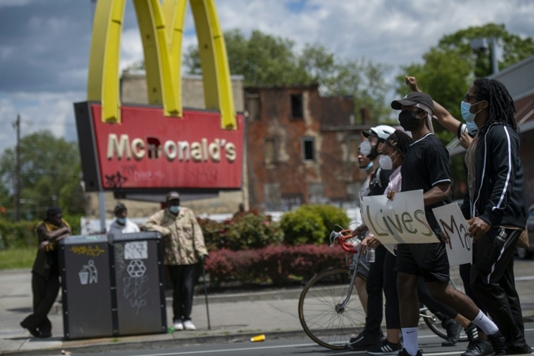 Businesses have proclaimed support for the protests against racism towards African Americans happening across the United States, including perhaps the most iconic of them all: ubiquitous fast food chain McDonald’s.
“Today we stand with black communities across America,” read a message posted in June on the brand’s social media accounts that listed the names of several African Americans killed by police and declaring: “He was one of us. She was one of us. They were all one of us.”
For Marcia Chatelain, a professor of history and African American studies at Georgetown University in Washington, McDonalds’s support for the biggest civil rights protests to hit the United States in decades came as no surprise.
As she writes in her book “Franchise: The Golden Arches in Black America,” the relationship between McDonald’s and black Americans is uniquely complex — a story of empowerment running up against the limits of American capitalism and inequality.
“McDonald’s is staying on brand,” Chatelain told AFP of the restaurant’s support for the protests. “They have consistently taken a position when they knew that that position was going to be supported not only by its consumer base, but also expand its profile.”
– Rising from ashes –
With nearly 39,000 restaurants in 119 countries and revenues of $21.1 billion in 2019, McDonald’s is among the largest fast food chains in the world and the golden arches of its logo are perhaps more tied to the concept of American capitalism than any other brand’s.
The company’s roots are in the post-World War II lifestyle changes that took place in the US, but Chatelain said its involvement in black communities can be traced to the aftermath of rioting that hit many American cities in 1968.
“Opening up franchising to African American communities allowed for the cultivation of incredibly wealthy people who were then able to contribute to a number of philanthropies, whether it’s historically black colleges and universities or local community efforts,” Chatelain said.
The push was in line with a trend prominent under former president Richard Nixon towards black capitalism, or the encouragement of building African American wealth through business.
That approach, Chatelain said, can’t address the long history of racist lawmaking in the US.
“It doesn’t necessarily eradicate the racism that has exacerbated the racial wealth gap, that creates discriminatory practices in lending, and also, it doesn’t solve the problems of people who will never be millionaires.”
Consider the role of McDonald’s in job creation. Black-owned franchises offered African Americans jobs that Chatelain said were “important in the sense that they’re readily available, and they can be accessible to people without high levels of what we call formal training.”
But McDonald’s employees lack access to health care, paid sick leave and child care for parents, all of which “exacerbates turnover, and then (McDonald’s) take advantage of the turnover to not create benefits,” Chatelain said.
That tension persists to this day as the company faces a unionization effort known as “Fight for $15,” which includes a $15 per-hour minimum wage among its demands.
– Going backwards? –
McDonald’s in the 1980s ran advertisements highlighting its hiring of African American employees and directors, but cracks have emerged recently in that narrative.
A lawsuit filed in January by two executives accuses the company of a “continuing pattern and practice of intentional race discrimination.”
Business Insider reported last year that black franchises make $68,000 net less per month than the average, and that according to the National Black McDonald’s Operators Association, the number of African American-run franchises dropped from 304 at the end of 2008 to 222 by the end of 2017.
“There is a sense that McDonald’s has gone backwards,” said Chatelain.
The company’s declaration of support for the racial justice protests spurred by the police killing of George Floyd in Minneapolis was done alongside many other top American brands.
Chatelain sees that as an opportunity for all American workers to push for better conditions, including employees of McDonald’s.
“I think that if McDonald’s was really interested in the quality of black lives and wanted to signal that black lives matter, that they could start with their workers,” she said.
“This is an incredible opportunity to do more than just give donations but to think about paid sick leave, about child care, about access to health care benefits as well as raising wages.”