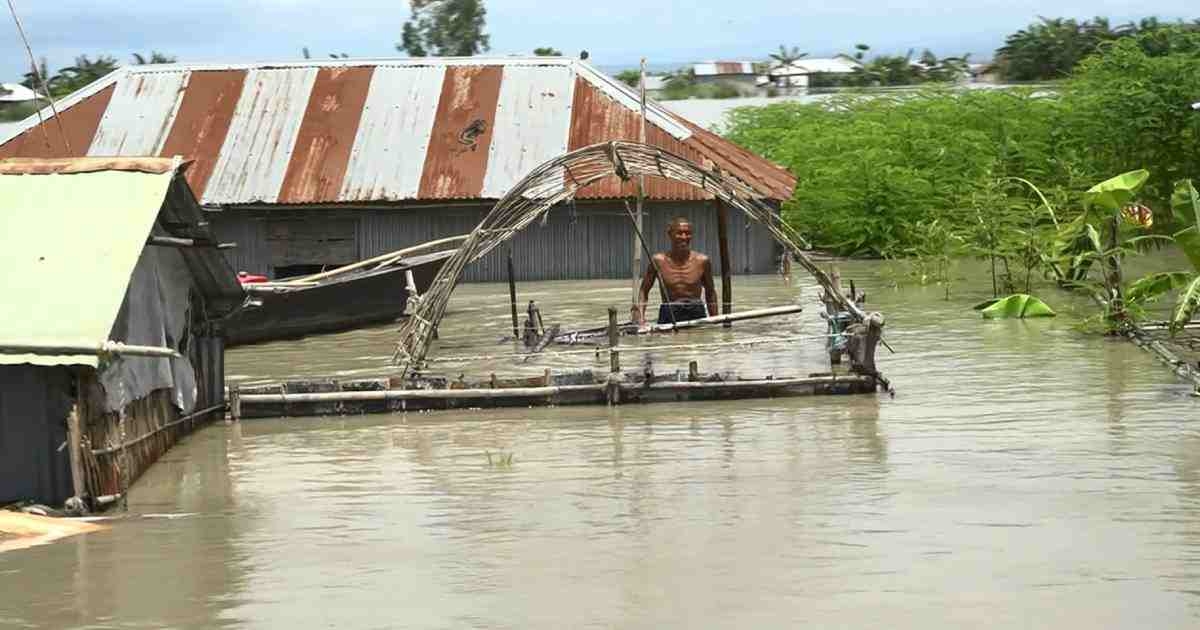 People in the flood affected areas in Kurigram are complaining of shortage of food and government assistance as they struggle to survive and worry over a bleak future.
The inundation of vast swathes of area in the district has caused another problem – shortage of fodder. The situation could force farmers to sell cows at nominal prices ahead of Eid-ul-Azha.
In some areas, houses have been flooded, forcing hundreds of people to live under the sky. Besides, many people are starving as they did not received adequate government aid.
Economic activities in the country have come to almost a halt since the coronavirus outbreak in early March. And when the floods hit several weeks ago, inundating fields and disrupting communications, there was hardly any job left for the people to support their families who have no option but to fully depend on the government help and others for food.
Kurigram Deputy Commissioner Mohammad Rezaul Karim said so far, 190MT rice, cash Tk 9 lakh, cash Tk 2 lakh for baby food, Tk 4 lakh for fodder and  6,000 packets of dry foods have been distributed among the flood-hit people.
But many complained of not getting adequate assistance.
Meanwhile, Kalipodo Roy, Fisheries and Livestock officer of the district, said fishes worth Tk 7.5 crore in over 2,000 ponds and water bodies were washed away. The deputy-director of the Department of Agriculture Extension (DAE) said standing crops of 10,000 hectares were damaged.
‘Have nothing to eat’
Brahmaputra River was flowing 73cm above its danger level at Chilmari point and 60cm at Nunkhawa point while Dharla River was flowing 45cm above its red mark earlier in the day.
An estimated 300,000 people in 60 unions of nine upazilas have been marooned while 70 feet area of Burirhat and Gaburhelan spars in Rajarhat upazila were gobbled by strong currents.
About 2,000 houses in the district have been lost to the river while 50,000 houses were damaged. According to the District Health Service sources, over 40,000 tube-wells of the district have gone under water, sparking a pure drinking water crisis.
“We’re living an inhuman life for the last one month. We’ve no work and food. We didn’t receive any relief from the local chairman and members. Besides, we could not go out of home because of coronavirus,” said Manser Ali, a resident of Jatrapur union in Sadar upazila.
Entaz Ali said he had been living on Kurigram-Jatrapur road with his family and domestic animals for the last 15 days.
“We don’t have food for ourselves. How are we supposed to manage fodder for the animals?” he asked.