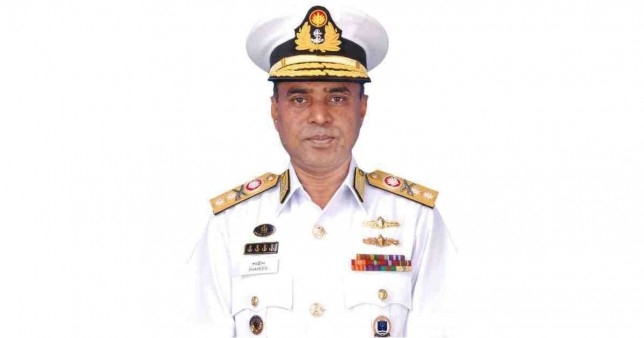 Newly-appointed Chief of Naval Staff Mohammad Shaheen Iqbal was adorned with the rank badge of vice-admiral on Sunday morning at a function in presence of Prime Minister Sheikh Hasina at Ganabhaban.
"Chief of Army Staff General Aziz Ahmed and Chief of Air Staff Air Chief Marshal Masihuzzaman Serniabat adorned the new naval chief with the rank badge of vice-admiral," PM's Press Secretary Ihsanul Karim said.
After the badge-adorning ceremony, he said, the prime minister wished the new naval chief's success in discharging his duties and assured him of extending all cooperation to this end.
Principal Staff Officer (PSO) of the Armed Forces Division Lt Gen Md Mahfuzur Rahman and Prime Minister's Office (PMO) Secretary Md Tofazzel Hossain Mian were present on the occasion.
The government appointed Assistant Chief of Naval Staff (Operations) Rear Admiral Mohammad Shaheen Iqbal as the new Chief of Naval Staff. The Ministry of Defence issued a gazette notification in this regard on July 18.
It said the appointment will come into effect on the afternoon of July 25, when Mohammad Shaheen Iqbal will be promoted to the rank of Vice-Admiral.
He has been made the naval chief for three years till July 24, 2023, the notification added.
He replaces Admiral Aurangzeb Chowdhury who went on retirement on July 25.