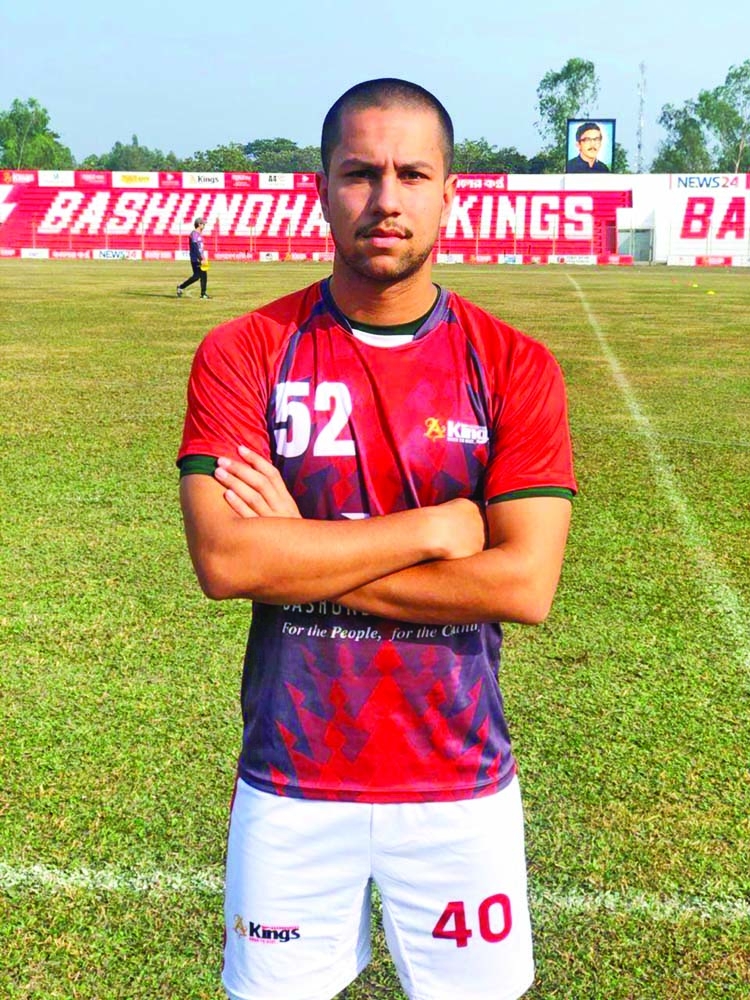 The Finnish-born Bangladeshi footballer Tariq Kazi, who have been playing for Bashundhara Kings, was awarded Bangladesh citizenship last year. -Facebook
The Finnish born Tariq Kazi becomes the second overseas-born Bangladeshi national footballer as the Bangladesh Football Federation (BFF) has announced 36-member squad for preliminary camp ahead of the forthcoming FIFA World Cup qualifiers in October and November.
BFF announced squad on Sunday with a press release which also said team will be reduced to 25 within a month.
Tariq Kazi, a Bangladeshi footballer living in Finland, earned call-up for the camp while Nazmul Islam Rasel , MS Bablu from Bangladesh Police and Sumon Reza from North Baridhara also earned call-up for camp.
"The preliminary squad for the isolation camp, which will start on August 5, has been announced. The foreign coaches will also leave by mid-August. I'm glad I was able to add some new players. I look forward to seeing them. I am eager to work with all of them. We have to be ready for the World Cup qualifiers in October and November."
National team head coach Jamie Day through a video massage. "There may be two FIFA friendly matches before the main match. If any footballer falls ill or gets injured in the camp, 36 footballers are being called in so that other players can stay fit." Bangladesh Football Federation (BFF) vice president and technician committee's chairman Tabith Awal said.
"That number will come down to 25 in a month. Then officially 23 people will play in the World Cup qualifiers" He added.
Earlier, when Jamie Day renewed his contract with Bangladesh, BFF added a condition that overseas-born footballers of Bangladeshi origin should be found. Tariq Kazi caught Jamie Day's eyes during his stint for Bashundhara Kings. Tariq Kazi's inclusion in national team is as expected.
Ahead of the ongoing season of Bangladesh Premier League (BPL), Tariq signed a three-year contract with holders Bashundhara Kings on November last year. But he left Dhaka for Finland on March as the club suspended its training camps for BPL amid lockdown in the wake of coronavirus. Tariq is now practicing to keep himself mentally positive, psychically fit in Finland. Last year Tariq Kazi was awarded Bangladesh citizenship.
Tariq's father Shayrul Kazi is a resident of Naogaon district and his mother is a Finish national. Shayrul Kazi is a teacher at the Tampere University of Applied Sciences. Bangladesh's conditioning camp is scheduled to start at Sahara Resort in Gazipur on August 7. The gym and grounds are being prepared in consultation with the resort authorities.
Overseas-born Bangladeshi children involved in sports are becoming interested in playing football in the country's jerseys. People from different countries are contacting Bangladesh to play international football.
Bangladesh national team captain Jamal Bhuiyan became the first overseas-born Bangladeshi footballer living in Denmark.  He is also the big face of the national football team. National team head coach Jamie Day is looking for such a face. Earlier, two or three overseas-born footballers came to Dhaka but could not settle in Bangladesh. Only Jamal Bhuiyan got a chance to represent the red-green.
According to the new schedule proposed by AFC, Bangladesh will host Afghanistan India and Oman on October 7, November 12 and 17 respectively while meeting Asian champions Qatar in their lone away match on October 13. Sylhet is set to host Bangladesh first match against Afghanistan.