Broad shines again as England bowl out West Indies for 197 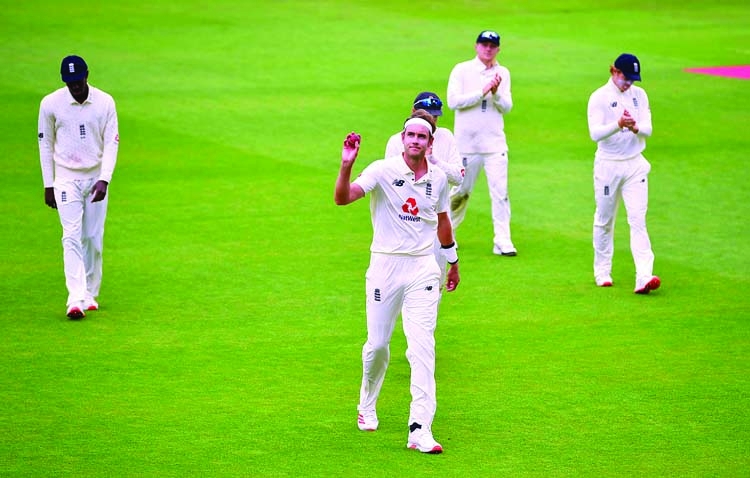 England pacer Stuart Broad holds the ball aloft after taking a six-wicket haul on the third day against West Indies in the third and final test at Old Trafford on Sunday. -Getty
Stuart Broad continued his fine form in the third and final test by grabbing four quick wickets on Sunday to dismiss the West Indies for 197 in reply to England's first-innings tally of 369.
England extended their lead to 182 runs at lunch on the third day as openers Rory Burns and Dom Sibley took the hosts to 10-0 at the start of their second innings at Old Trafford.
Broad ended with 6-31 in 14 overs, mopping up the tail to give England a healthy lead, and the fast bowler is now just three away from his 500th test wicket.
The 34-year-old, controversially left out at the start of the series, was the key man with both bat and ball on Saturday as he scored a 33-ball half century - the third fastest by an English test batsmen - and took two wickets when the West Indies began their reply.
But it took a frustrating 50 minutes for England to make a breakthrough on Sunday after the West Indies had resumed on 137-6 facing the possibility of being asked to bat again.
Captain Jason Holder led the fightback as he scored an important 46 runs to help his side avoid the follow-on. He and Shane Dowrich added 41 runs before the Windies skipper was trapped lbw by Broad.
Holder had been superbly caught by Ollie Pope at mid-wicket when on 38 but was called back to the crease after television reviews showed Chris Woakes's delivery was a no ball.
Rakheem Cornwall looked to throw the bat but was also trapped lbw by Broad for 10 and Kemar Roach followed three balls later as he got a healthy edge and England skipper Joe Root took a sharp low catch at first slip.
Dowrich (37) was the last to fall as he hit a wild slash straight up into the air which Woakes caught to give Broad his sixth wicket.
The series is level at 1-1 after West Indies won by four wickets at Southampton before England secured a 113-run victory at Old Trafford.
--- Reuters, Manchester