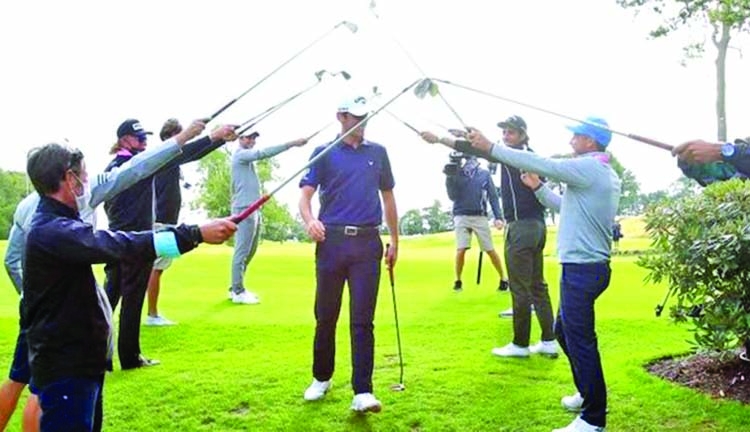 Paratore was given a warm reception and guard of honour by his fellow players as he walked off the final green. -BBC
Italy's Renato Paratore won the British Masters at Close House to claim his second European Tour victory.
The 23-year-old carded a two-under 69 to win on 18 under, three clear of 19-year-old Rasmus Hojgaard (70), with South Africa's Justin Harding third.
English trio Andy Sullivan (67), Robert Rock (69) and Dale Whitnell (71) shared fourth place on 13 under. Tournament host Lee Westwood finished on eight over after a 79 that featured a quintuple-bogey eight at the ninth.
The 47-year-old, who also hosted the British Masters in 2017 at the course near Newcastle where he is a member, said that despite the excellent work involved in getting the event on amid the coronavirus event crisis, he felt "out of my comfort zone" all week and that he would not be playing at next month's US PGA Championship. The players, caddies, officials and media have all been in a bio-bubble this week, staying at the on-site hotel, while fans were not allowed in to watch.
Paratore emerged victorious after a sparkling display that saw him play his first 62 holes this week without dropping a shot.
He had been trying to become the first player to win a European Tour event without making a bogey since Jesper Parnevik at the 1995 Scandinavian Masters.
But his first bogey of the tournament came at the par-three ninth in Saturday's final round, and he dropped another shot at the 11th. But birdies at the fourth, seventh, 10th and 17th holes saw him run out a comfortable winner.
He was briefly challenged by Harding and Hojgaard, but bogeys on the 14th and 15th holes respectively all-but ended their hopes.
"I am really happy," said Paratore. "It was a little bit strange but fortunately there was some crowd at the end.
"I did not expect that from my friends on the Tour and it was a really good situation.
"I plan to play the next five events and I said to my team the goal was definitely to get one of the 10 places in the US Open that are available (from a mini order of merit)."
The British Masters was the first of six European Tour events that will be staged in a 'UK swing' this summer, with next week's tournament being held at the Forest of Arden.
-- BBC