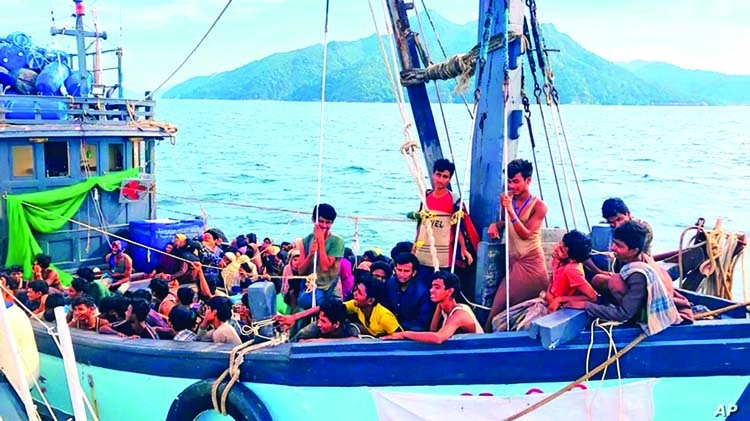 In this handout photo released on April 5, 2020 by the Malaysian Maritime Enforcement Agency, a wooden boat carries suspected Rohingya migrants detained in Malaysian territorial waters off the island of Langkawi. -AP
Malaysian authorities launched a search on Sunday for 24 Rohingya refugees who went missing while trying to swim to shore from a boat off the resort island of Langkawi, reports Reuters.
Muslim-majority Malaysia has long been a favoured destination for Rohingya Muslims seeking a better life after escaping a 2017 military crackdown in Myanmar and, more recently, refugee camps in Bangladesh.
Malaysia's coastguard said 25 people had tried to swim to shore late on Saturday when their boat was near the west coast of the island but only one reached land. Two boats and one aircraft were sent out on Sunday to scour an area of more than 100 square nautical miles, according to Mohd Zawawi Abdullah, provincial director for the Malaysian Maritime Enforcement Agency. "We have relayed information to other rescue agencies and local fishing communities and will also inform the Thai authorities ... to assist in the search," Zawawi said in a statement.
Police detained the person who reached shore for questioning. They did not say what happened to the boat.
Last month, 269 Rohingya were detained on arrival in Langkawi.
At the time, the head of the MMEA said the 269 were transferred from a larger "motherboat" on which dozens of people were believed to have died and were thrown into the sea over a four-month voyage.
Malaysia does not recognize the refugee status. Prime Minister Muhyiddin Yassin said last month the country could not take in any more Rohingya, citing a struggling economy battered by the coronavirus pandemic.