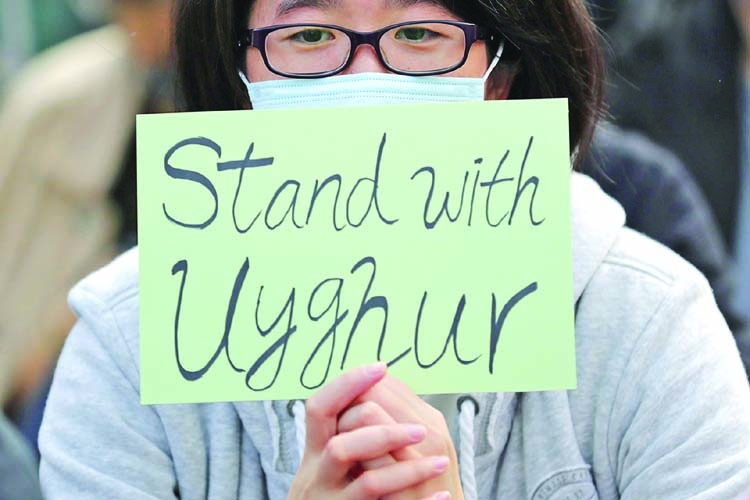 A man holds a sign during a rally to show support for Uighurs and their fight for human rights in Hong Kong on December 22, 2019. -AP
The EU must adopt coordinated sanctions targeted at Chinese leaders and officials responsible for human rights violations in Uighur labor camps and in Hong Kong, a group of MEPs have demanded of Josep Borrell, the bloc's foreign policy chief, reports politico.
Back in December, EU foreign ministers paved the way for Magnitsky-style sanctions on human rights offenders (named after Sergei Magnitsky, a tax adviser whose death in a Russian prison after investigating a case of government tax fraud became a symbol of human rights abuses).
Last month, European Commission President Ursula von der Leyen said Brussels was mulling a coordinated European response to China's new security law in Hong Kong, though she added: "This has to be done with care."
Now a group of 23 Renew Europe MEPs have written to Borrell to demand that the process be accelerated following "disturbing footage from China of handcuffed and blindfolded detained Uighurs and the continuous crackdown in Hong Kong."
In the letter, seen by POLITICO's Brussels Playbook, which is coordinated by Hilde Vautmans and Katalin Cseh and signed by Nathalie Loiseau, the former French Europe minister, they argue: "The EU should adopt the framework swiftly to make sure we can ban human rights violators from traveling to Europe and freeze their assets. By taking away their lives of luxury, the EU will hit them where it hurts most."
Separately, the chairs of foreign affairs committees from legislatures across Europe - including the European Parliament, German Bundestag and U.K. House of Commons - issued a joint statement overnight, urging Beijing to "rethink" its new security law in Hong Kong.