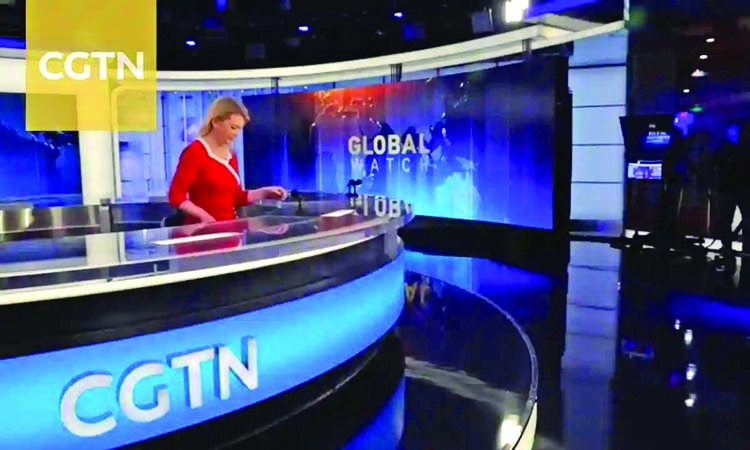 Britain's broadcasting regulator is under mounting pressure to bar China's state-owned TV channel from the UK's airwaves after accusations that it has repeatedly breached impartiality rules and aired forced confessions.
There are currently three live investigations under way by Ofcom into China Global Television Network (CGTN), the country's English-language news channel. The regulator has already ruled against the channel earlier this month, for airing a forced confession by the former British journalist Peter Humphrey. Labour is to raise alleged repeated breaches by the channel with Ofcom's chief executive Melanie Dawes, reports Guardian.
Ofcom has also received a complaint stating that CGTN should not be allowed to broadcast at all because it is effectively controlled by a political party. Human rights group Safeguard Defenders submitted its complaint earlier this year. Peter Dahlin, its director, said: "The best way forward is to revoke their licence to teach them that this is unacceptable. And then of course they can, according to the rules, reapply for a licence after that and restart the process."
It comes amid increased tension with China, following Britain's decision to strip equipment made by Chinese company Huawei out of the country's phone networks by 2027. The decision came after a mounting backlash among Tory MPs about the company's involvement in the 5G network. That decision led Chinese state media to warn of a "public and painful" retaliation. The state-run Global Times said in an editorial that China could not "remain passive".
CGTN is available on several UK platforms, with programmes produced around the world. It does not publish viewing figures, but has recruited a number of western journalists, including former BBC reporters, to boost its European output. Its increased European presence included opening a production base in London last year. It already has a US offshoot, where it has been registered as an agent representing the interests of a foreign power.

Complaints submitted to Ofcom about CGTN include one from Simon Cheng, a former employee of the UK's consulate in Hong Kong. He alleges CGTN broadcast his forced confession. He was detained during a trip to China in August and says he was made to confess to soliciting prostitution.
Another complaint came from the daughter of a detainee. Angela Gui, the daughter of Hong Kong bookseller Gui Minhai, who disappeared in 2015, said the channel broadcast forced confessions from her father. He was released, but rearrested in 2018 and is still detained in China.
Jo Stevens, the shadow culture secretary, said: "The findings against CGTN are damning and Ofcom have already said they will take action which could go as far as banning the channel from the UK airwaves. Ofcom has an ongoing duty to make sure those that hold a licence to broadcast in this country are fit and proper.
"All too often TV channels run by foreign states, such as Russia Today and the Iranian Press TV, which was banned in 2012, have found themselves unable to abide by the broadcasting code. CGTN and other state-backed broadcasters have a history of flagrantly breaching the Ofcom code. While the regulator can and does impose financial penalties, these are less of a deterrent than for other TV channels. There needs to be a review of whether the current sanction regime is sufficient."
While there are calls to have its licence revoked, other senior MPs, such as former first secretary of state Damian Green, say that banning it should be a "last resort".
Humphrey, who has a second complaint against CGTN lodged with Ofcom, said: "
I hope that by the cancelling of that licence, our people in the UK will never again have to be subjected to viewing that form of abusive propaganda material, of people 'confessing' in cages."
CGTN was contacted for comment, but had not replied by the time of publication. Stations found to have violated the broadcasting code are usually fined in the first instance, but there is precedent for revoking a licence. Press TV, the Iranian English-language station, lost its licence in 2012.