Stay ready to tackle any situation if flood lingers: PM 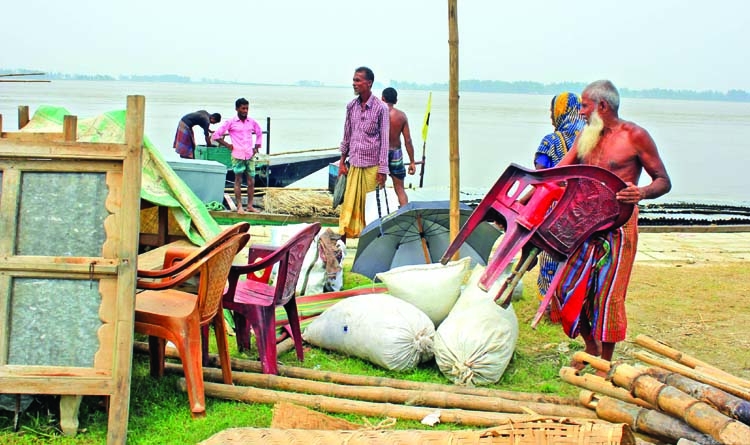 Flood-hit families take shelter on high lands with their belongings. The photo was taken from Dhekuria area of Sirajganj's Kazipur on Sunday. -AA
Prime Minister and Awami League (AL) President Sheikh Hasina on Sunday asked her party leaders and workers to remain prepared to tackle any situation if the ongoing flood is lingered.
"This year's flood may be prolonged. The 1998 deluge lasted for the longest period of 69 days, while the 1988 flooding was for two weeks," she said, reports BSS.
The premier added: "If the current flood is prolonged like 1998, we'll have that type of preparation about what should we do."
Sheikh Hasina said this while addressing a coordination meeting of the AL's joint general secretaries and organizing secretaries over mobile phone at her Dhanmondi political office here this afternoon. Citing the experience of combating the 1998 flood, the premier said her government has made adequate preparations to take prompt measures to face any situation if the ongoing flood is lingered like 1998.
In this connection, she said many (people) at that time (1998) had said that two crore people would die, but none died as her the then government quick steps in this regard. "We (AL leaders and workers) distributed handmade breads and cooked foods, purified water and handmade oral saline to the flood-hit people at that time," she recalled, saying such types of preparations are required this time too.
The premier reiterated that there would be no crisis of foods as her government has already stockpiled enough food grains, while its efforts to this end are going on so that nobody suffers from food crisis.
Sheikh Hasina said she has been trying her best to keep operative the wheels of the country's economy amid the coronavirus pandemic.
"We've already given the national budget and are passing the projects at the quickest possible time. We have been doing these as we hope that better days will come after the coronavirus pandemic," she continued.
The premier urged all to follow the health guidelines properly including wearing masks and taking warm water to protect themselves from the lethal virus.
She expressed her heartfelt gratitude to members of the armed forces, BGB, police as well as local administration and leaders and activists of the AL and its front and associate bodies for extending all sorts of cooperation to the people to ease their hardship in the wake of the COVID-19 pandemic.
AL Presidium Members Advocate Jahangir Kabir Nanak and Abdur Rahman, Information Minister and party's Joint General Secretary Dr Hasan Mahmud, Education Minister and Joint General Secretary Dr. Dipu Moni, Joint General Secretary AFM Bahauddin Nasim, Organizing Secretaries Ahmed Hossain, BM Mozammel Haque, Mirza Azam and SM Kamal Hossain, and Deputy Office Secretary Sayem Khan, were present, among others.