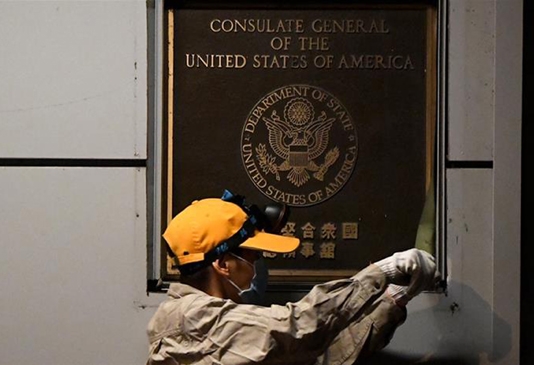 The American flag was lowered at the United States consulate in Chengdu on Monday, days after Beijing ordered it to close in retaliation for the shuttering of the Chinese consulate in Houston.
Footage on state broadcaster CCTV from outside the consulate showed the flag being slowly lowered early Monday morning, after diplomatic tensions soared between the two powers with both alleging the other had endangered national security.
Relations deteriorated in recent weeks in a Cold War-style standoff, with the Chengdu mission Friday ordered to shut in retaliation for the forced closure of Beijing’s consulate in Houston, Texas.
The deadline for the Americans to exit Chengdu has been unclear, but the Chinese consulate in Houston was given 72 hours to close after the original order was made.
On Saturday AFP reporters saw workers removing the US insignia from the front of the consulate.
Over the weekend, removals trucks entered the US consulate and cleaners were seen carting large black rubbish bags from the building.
Beijing says closing the Chengdu consulate was a “legitimate and necessary response to the unreasonable measures by the United States”, and has alleged that staff at the diplomatic mission endangered China’s security and interests.
Washington officials, meanwhile, said there had been unacceptable efforts by the Chinese consulate in Houston to steal US corporate secrets.