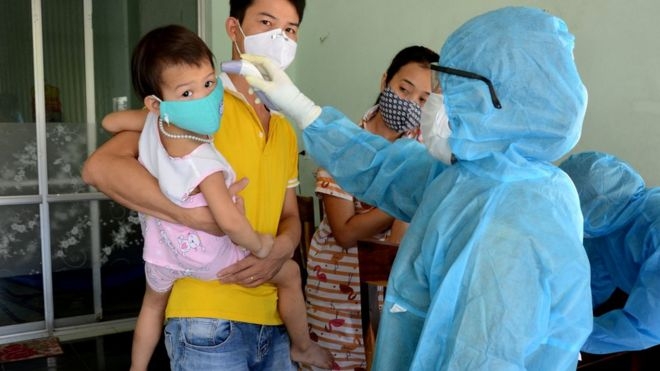 Vietnam has ramped up its coronavirus control measures after recording four new locally transmitted cases.
The country has been lauded as a success story of the pandemic having acted early to close borders and enforce quarantine and contact tracing.
It has recorded just over 400 cases and no deaths, and had gone nearly 100 days with no new cases.
The new cases are all linked to Da Nang, a central coastal city popular with domestic tourists.
The first case - patient 416 - was a 57-year-old man who sought medical care on 20 July for flu symptoms and was diagnosed with Covid-19. He is now on a ventilator and according to doctors quoted in local media, in a critical condition.
Officials say they do not yet know where he contracted the virus and that he had not recently left the city.
Contact tracing identified more than 100 people who had interacted with the man, but all returned negative tests.
However over the weekend, three more cases were confirmed.
One was a 61-year-old man in Da Nang, who is now on a ventilator. It was unclear whether he was linked to the previous case.
The second was a 17-year-old man who had been visiting Da Nang from neighbouring Quang Ngai province but had travelled home on a coach with people who had been at the Da Nang C Hospital.
And a 71-year-old woman who had been admitted to the same hospital for chest pains also tested positive.
Da Nang C Hospital sealed its doors in response to the first diagnosis. The city has reintroduced social distancing measures and has banned incoming domestic tourism for 14 days, a major blow for the tourism-dependent region.
Non-essential businesses have been ordered to close and gatherings of more than 30 people are banned.
Hospitals across the country have also stepped up preventative measures, while the capital, Hanoi, has begun urging people to wear masks in public again.
Domestic football matches were suspended on Sunday.
The new cases are a significant setback for Vietnam, which has been proud of its success in containing the virus.
It closed its borders to almost all travellers except returning citizens early on in the pandemic and requires anyone entering the country to quarantine in government facilities for 14 days and undergo testing. Most of its cases have been detected in quarantine.
An extensive contact tracing and testing operation also meant it was able to quickly quash local outbreaks.
It has so far recorded only 420 cases and no patients have died.
Its most famous patient, a British patient who spent 68 days on a ventilator, was able to travel home earlier this month.