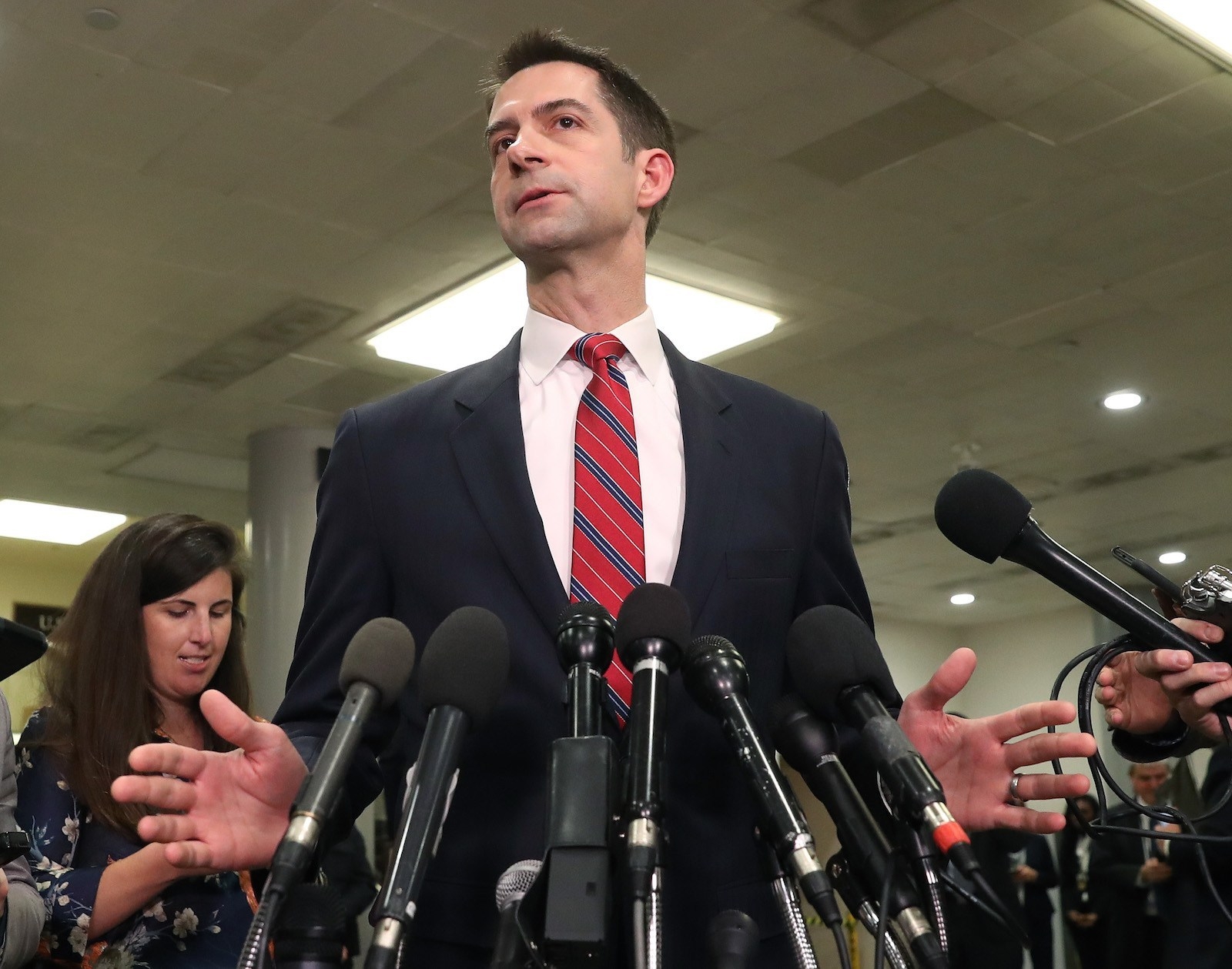 A senator for the state of Arkansas has described slavery as a "necessary evil" on which the American nation was built.
In a local newspaper interview, Republican Tom Cotton said he rejected the idea that the US was a systemically racist country to its core.
He is introducing legislation to ban federal funds for a project by the New York Times newspaper, aimed at revising the historical view of slavery.
The project's founder expressed outrage at the remarks.
This comes amid the rise of the Black Lives Matter movement. The death of George Floyd, an unarmed black man, in Minnesota in May sparked huge protests across the US against police brutality and racism.
In recent days the city of Portland has seen nightly clashes, which have escalated since a deeply controversial decision by President Donald Trump to send federal law enforcement to the city.
Senator Cotton has been a strong critic of the nationwide protests, describing them in an opinion piece for the New York Times as an "orgy of violence" and backing Donald Trump's threat to use troops to quell unrest.
The article was widely criticised and more than 800 employees signed a letter denouncing its publication, saying it contained misinformation.
The newspaper later apologised for it, saying it fell below their editorial standards. Opinion editor James Bennet resigned as a result.
What did Senator Cotton say?
Senator Cotton told the Arkansas Democrat-Gazette: "We have to study the history of slavery and its role and impact on the development of our country because otherwise we can't understand our country.
"As the Founding Fathers said, it was the necessary evil upon which the union was built, but the union was built in a way, as [Abraham] Lincoln said, to put slavery on the course to its ultimate extinction."
On Thursday Senator Cotton introduced the Saving American History Act, aimed at stopping funding for 1619, an initiative which bases US history teaching around the first arrivals of slave ships in the US in August of that year.
The project won the Pulitzer prize for commentary for its founder, the New York Times journalist Nicole Hannah-Jones, but it has been criticised by many US conservatives, with Senator Cotton describing it as "left-wing propaganda".
"The entire premise of the New York Times' factually, historically flawed 1619 Project… is that America is at root, a systemically racist country to the core and irredeemable," Senator Cotton said.
"I reject that root and branch. America is a great and noble country founded on the proposition that all mankind is created equal. We have always struggled to live up to that promise, but no country has ever done more to achieve it."
Responding to Senator Cotton's legislation, Hannah-Jones tweeted that if slavery was justified as a means to an end, anything else could be too.
Senator Cotton responded, denying that he was justifying slavery and describing Hannah-Jones' comments as "lies".