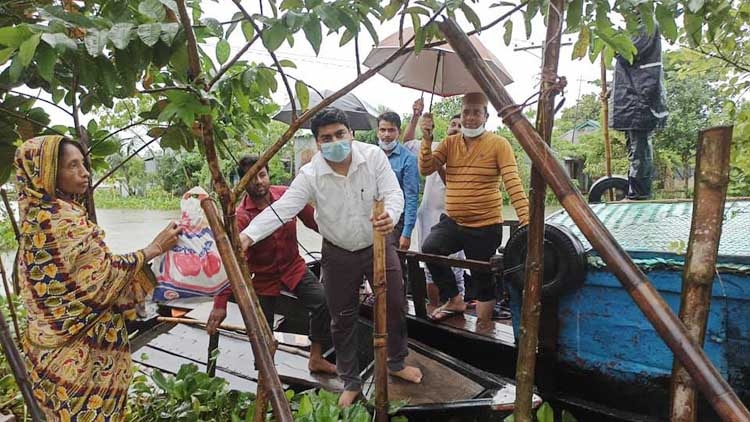 The entire world is passing through a critical time as the deadly coronavirus pandemic has ravaged the mankind in an unprecedented manner. People are being infected with the virus, losing their lives.
Like other countries of the world, Bangladesh is also in a dire distress due to the global pandemic. The government has relentlessly working to tackle the situation. Most of the government officials have sincerely serving people beyond their assigned jobs in the crisis though irregularities and corruption of officials have surfaced.
ASM Mosa, Upazila Nirbahi Officer (UNO) of Sarail in Brahmanbaria, is one of the government officials who have won the hearts of people through dedicated services.
During the COVID-19 pandemic, UNO Mosa has been working with dedication and sincerity to create awareness among people about the virus. He regularly works for ensuring social distancing and compliance of health guidelines amid the pandemic.
When a devastating tornado recently hit some villages of the upazila, ASM Mosa rushed to the affected people with relief goods. He also provided government aid including CI sheets and cash money to the helpless people.
UNO Mosa has also distributed cash money and food items among the people affected by erosion of the Meghna river in Panishwar area of the upazila.
On Monday, he visited flood-affected different villages under Aruail and Pakshimul unions in the upazila and distributed relief goods among the marooned people.
Local people said UNO ASM Mosa has stood beside the distressed people realizing their sufferings. He has reached the daily essentials as gifts from Prime Minister Sheikh Hasina to the homes of poor, unemployed people in nine unions of the upazila during the corona situation, they added.
UNO ASM Mosa said, “I am grateful to the people of Sarail as they have provided all-out cooperation to me. I am only doing my job assigned by the government with honesty.”
I seek more assistance from all including politicians, public representatives, officials and journalists, he added.