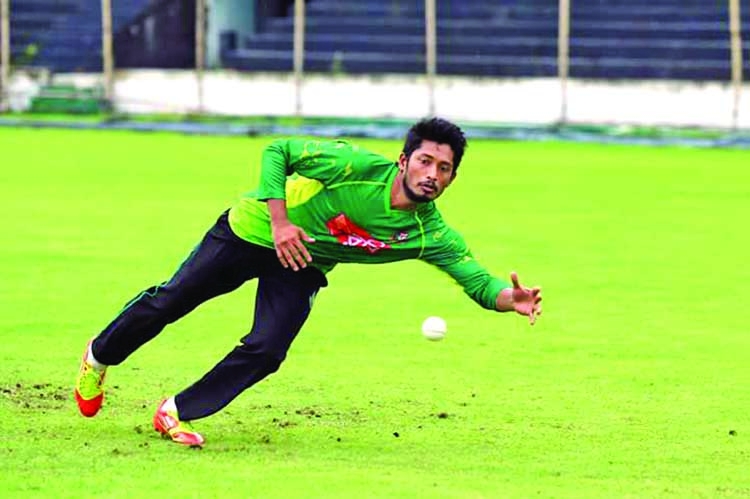 Anamul Haque Bijoy during training. -Twitter
The first-phase of Tigers' week-long one-to-one individual training which started on July 19 for the first time post-lockdown was scheduled to come to an end on Sunday but BCB extended individual training by a few more days, BCB confirmed on Sunday night. As per the latest schedule, the programme is extended only in Dhaka.
As per the players' interest to train outdoor, the Bangladesh Cricket Board (BCB) initiated the move on July 19 with nine players, who started practice individually at four venues- Dhaka, Sylhet, Khulna and Chattogram before Pace duo Taskin Ahmed and Mehedi Hasan Rana showed their interest to use the Mirpur ground for their practice session as per (BCB)'s latest guidelines. Anamul Haque Bijoy was the latest who joined the individual training programme of the cricketers. He enjoyed his first training on Monday at Sher-e-Bangla National Cricket Stadium. Along with Anamul, pacer Mehedi Rana also took part in the individual training programme on Monday in Mirpur.
A total of 14 cricketers  including Anamul so far took the opportunity to train individually in four different venues, arranged by BCB and a number of cricketers also showed their interest to begin training after the break of Eid-ul-Adha. The board has recently added Rajshahi in their list in which Nazmul Hossain Shanto started his practice.
"I started to practice in Mirpur after four months. It feels really good. It's always special to practice in Mirpur. But, since it was four first outdoor practice in four months, it was tough for me. I will continue training before Eid and will do the same after the Eid holidays," Anamul said after his first-day of practice on Monday.
"I would like to thank BCB for providing us with the facilities to train in a safe environment. I would also like to thank all who are involved in this," he added.
Mushfiqur Rahim, Mohammad Mithun, Shafiul Islam, Imrul Kayes, Taskin Ahmed, Mehedi Hasan Rana and Anamul chose Sher-e-Bangla National Cricket Stadium to have their practice. Mehidy Hasan Miraz, Mahedi Hasan and Nurul Hasan Sohan trained at Sheikh Abu Naser Stadium in Khulna, Nasum Ahmed and Syed Khaled Ahmed practiced at Sylhet International Cricket Stadium while Nayeem Hasan trained at Zahur Ahmed Chowdhury Stadium in Chattogram. Due to worldwide corona outbreak, a number of international home and away tours and competitions as well as domestic events of Bangladesh have seen postponements and players was forced to stay home.
Cricketing activities in the countries remain stopped since mid March following the outbreak of COVID-19, a deadly virus that left the country stranded almost. Some of the players and officials including former skipper Mashrafe Bin Mortaza and left-arm spinner Nazmul Islam Apu were contracted the virus before recovering fully. BCB previously postponed the Bangabandhu DPDCL 2019-20 after the first round following the nationwide Coronavirus (COVID-19) pandemic back in March 16.
The players like Mushfiqur Rahim and others requested BCB to give them an opportunity of outdoor training. The BCB agreed and arranged individual training for the players in accordance with the standard health protocol, opening up a possibility to begin cricketing activities in full scale.