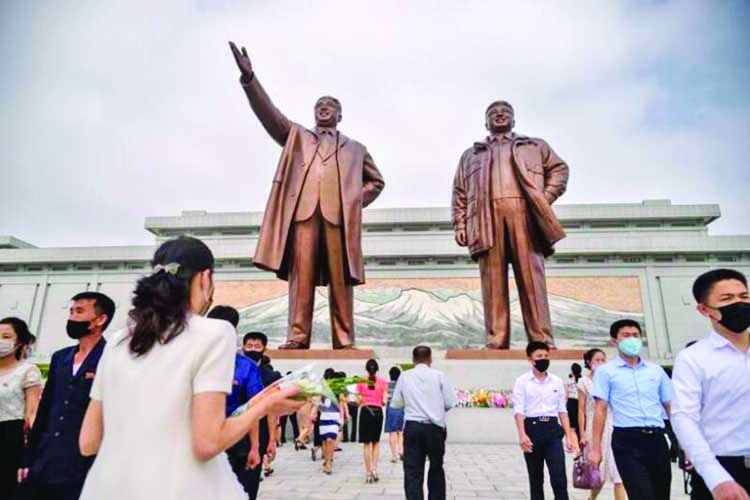 Analysts said North Korea was likely to have already had virus cases. -AFP
North Korea is seizing on the return of a defector from the South to point the finger at Seoul for the arrival of coronavirus in the country after months of denying it had any cases, analysts said on Monday.
Pyongyang imposed a lockdown on the border city of Kaesong, saying it had found a suspected Covid-19 infection in a defector who had returned across the heavily fortified Demilitarized Zone that divides the peninsula, state media reported at the weekend.
For months the North had denied having any cases of the virus that swept the world after first emerging in neighboring China - its main diplomatic backer and trade partner - raising scepticism among observers. And Seoul officials said on Monday that the man believed to be the re-defector has never been confirmed as a coronavirus patient in the South, nor a contact of a confirmed case.
The South has carried out more than 1.5 million tests as part of an extensive "trace, test and treat" model that has largely brought the outbreak under control. Analysts said the North was likely to have already had virus cases, and Pyongyang was looking to blame Seoul for the outbreak, rather than its own longstanding ally Beijing.
"North Korea may try to use the defector's return to deflect the blame for an outbreak that has already occurred, or for any future quarantine failures," said former US government North Korea analyst Rachel Lee.
"It could take issue with South Korea's poor frontline security," she told AFP. "It could even claim that South Korea purposefully sent the defector back to North Korea to spread the virus there."
Duyeon Kim, a Korea expert at the International Crisis Group, added that by blaming an imported case from the South, the North "can now legitimately and openly accept" aid from Seoul. The North could "further send a message about defectors painting them as enemies of the state", she added in a tweet.
Pyongyang has repeatedly excoriated leaflet-sending defectors and the Seoul government in recent weeks, worsening already frozen inter-Korean ties and culminating in the North blowing up a liaison office on its side of the border. It is extremely rare for North Korean defectors to return to their original country, where rights groups say they face severe punishment for leaving - the South's Unification Ministry says only 11 are known to have done so in the last five years.
It is even rarer for them to travel through the Demilitarized Zone, one of the world's most secure borders, replete with minefields and guard posts.
But the South Korean military said a North Korean defector was believed to have returned to the North from Ganghwa island, on the Han river estuary northwest of Seoul.
He was not officially identified but according to multiple media reports and defectors he is a 24-year-old who defected in 2017, also by swimming across a river.
He is being investigated on rape allegations in the South, they added.
Last month he appeared on a YouTube channel run by another defector, and said it took him more than seven hours to swim across the inter-Korean border when he went south.
Afterwards, he "cried for 10 days, as I kept on thinking about my family" back home, he said in the interview.
Seoul's health authorities said his name did not appear in the South's database of confirmed coronavirus cases, nor its list of their contacts.Two individuals who had contact with the suspected re-defector were tested on Sunday and both tested negative, added Yoon Tae-ho of the Central Disaster Management Headquarters.
The North's medical infrastructure is seen as woefully inadequate to deal with any epidemic and Pyongyang closed its borders in late January - the first country in the world to do so - in an effort to protect itself against the coronavirus.The situation in Kaesong "may lead to a deadly and destructive disaster", official news agency KCNA reported at the weekend.