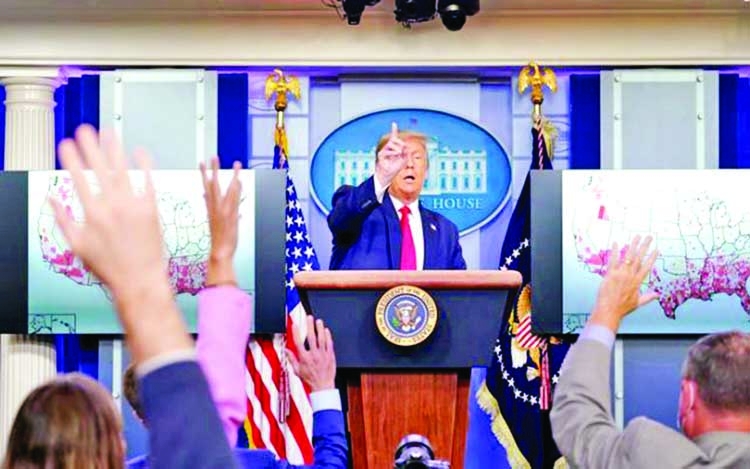 US President Donald Trump
Top aides to US President Donald Trump said on Sunday they agreed in principle with Senate Republicans on a US$1 trillion (S$1.38 trillion) coronavirus relief package - the party's opening offer in negotiations with Democrats less than a week before enhanced unemployment benefits expire. White House Chief of Staff Mark Meadows told reporters in the Capitol that he expects the package to be unveiled on Monday afternoon after some final details are clarified.
US Treasury Secretary Steve Mnuchin said the package will contain extended unemployment benefits that aim to replace 70 per cent of a laid-off worker's previous wages. "We're done," Mnuchin told reporters as he left the Capitol on Sunday. He said some language was being checked, but there were "no outstanding issues".
Mnuchin and Meadows would not discuss details, but the US$1 trillion Republican offer was expected to include another round of direct payments to individuals, a reduced federal supplement to unemployment benefits and liability protections against coronavirus-related lawsuits.
An extra US$600 per week in federal unemployment benefits, which economists say has propped up consumer spending and has allowed laid off workers to pay rent and mortgages, is due to expire on Friday. The benefits were part of US$3.7 trillion in coronavirus aid approved in March as the US economy shut down. But widespread business reopenings have been thwarted as the virus surges in states such as California and Florida, which overtook New York, an early hotspot, in total cases on Sunday.
More than 146,000 Americans have died of Covid-19 - nearly a quarter of the global total - and there are nearly 4.2 million confirmed cases in the country, a rate of 1 infection in 79 people.
Before going to Capitol Hill on Sunday, Mnuchin and Meadows floated the idea of a piecemeal approach to the next round of coronavirus relief, addressing expiring items while leaving other issues to be tackled later. Mnuchin told Fox News Sunday that the two most pressing issues were the expiring unemployment benefits.

and shielding businesses, schools and universities from lawsuits.
House Democrats passed their own US$3 trillion coronavirus relief bill in May, which would keep the US$600-a-week supplement in place through the end of 2020.
House Speaker Nancy Pelosi, the top Democrat in Congress, criticized Republicans for not being able to agree on a plan when Americans are "on the brink" and going hungry.
"They're in disarray and that delay is causing suffering for America's families," Pelosi told CBS's "Face the Nation."
White House economic adviser Larry Kudlow said Americans will receive a US$1,200 check as part of the new package, along with tax credits for small businesses and restaurants. Kudlow told CNN's "State of the Union" the package would also extend a federal moratorium of evictions contained in previous relief legislation.
Democrats prefer a flat amount of enhanced benefits rather than having to figure out 70 per cent of a worker's wages, a problem for some antiquated state computer systems.
"The reason we had US$600 was its simplicity," Pelosi said.
On liability protections, Pelosi said Democrats will not support a scenario in which workers can be told they are essential but the employer has no responsibility to make the workplace safe for them.
Mnuchin told Fox News Sunday that he was optimistic about a deal with Democrats.
"We can move very quickly with the Democrats on these issues. We've moved quickly before, and I see no reason why we can't move quickly again," Mnuchin said.