Sacrificial animal market yet to get momentum in Barishal 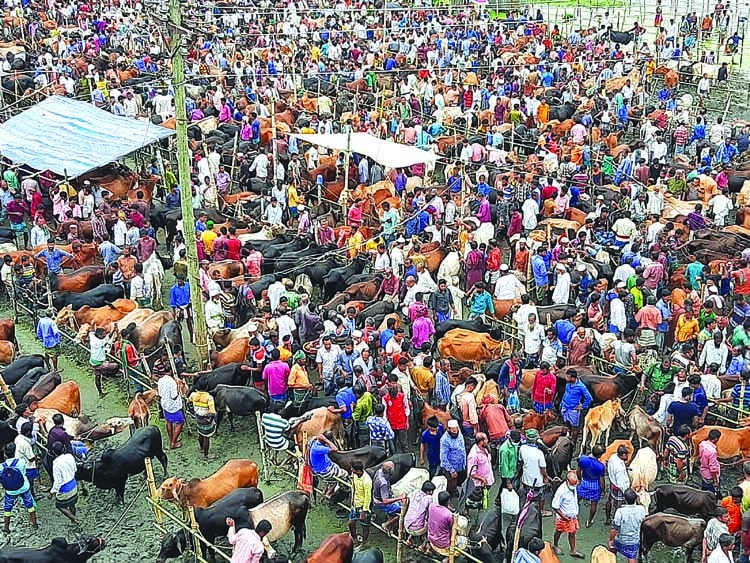 Although buyers are swarming cattle markets in Barishal city, sellers are worried as the trade has not gotten a good momentum due to COVID-19 pandemic. Barishal City Corporation is warning citizens to take safety precautions before going in cattle markets
With only five-day left for Eid-al-Azha, cattle goat markets in Barishal yet to get momentum on Sunday and assumed to be reached on peak from Wednesday noon.
Prices of sacrificial animals were not  high due to decrease of numbers of participants of the festival in fear of spreading covid-19, but traders and visitors ignoring corona preventive health regulation.
Six cattle markets including 2 permanent at Baghia and Port Road and 4 makeshift at other areas of the city prepared to start functioning.
Less supply of both traders, animals and customers may be increased in the market before 72 hours of Eid as there were acute shortage of space and crisis of fooders in the region in rainy season, said Abdur Razzak, BCC market-inspector. Barishal district administration sources said this year 35 markets of sacrificial cattle and animals were permitted to be held in ten upazilas of the district. Last year this number was 66 in the district except Barishal city Corporation.
Shahabuddin Ahmed, commissioner of Barishal Metropolitan Police and Saiful Islam, district police superintendent, said they accelerated patrolling in uniform and plain clothes at entrance points, on roads and highways to prevent extortions, muggers, pickpocketers and installed fake currency detection booths in cattle markets.
However, after visiting the cattle-goat market at Charmonai it was found that cattle market arranged at one side and goat market in other side of the madrasa bazaar.
Sirajul Islam, izaradar of goat market at Charmonai, said in this market only 50 taka hasil(tax) for per goat and 100 taka for per cattle fixed. Most of the buyers, sellers and visitors in the market ignoring the health regulations were busy there without wearing mask, ignoring social distancing and smoking openly. Yunus Ali, one of the izaradar of cattle market, acknowledged that regulation for preventing spreading pandemic is ignored here and administration should be strict for that.
Ali Hossain, a cattle trader of that market, said customers were roaming at the market, but they just comparing prices of sacrificial animals in market instead of buying them.
Preserving animals for long-time and managing fodder for those become trouble-some in the urban areas due to shortage of space and work force. So we prefer to purchase sacrifice-animal at the last time, said Lutfur Rahman, a city dweller.
Mentioning high transport cost and price hike of fodders in rainy season, Shamsur Rahman, one of the traders, said he brought 6 goats in the market, but customers only visiting those even without bargaining.
Cattle trader Abdur Rahman, he brought 15 cows in the market, but failed to sale any one and he is not hopeful about profit, but only to cover purchasing cost.
Akbar Ali, one purchaser of animal in the market, said price was not too much considering the present condition of monsoon and pandemic.