Bangladesh just one step behind Italy 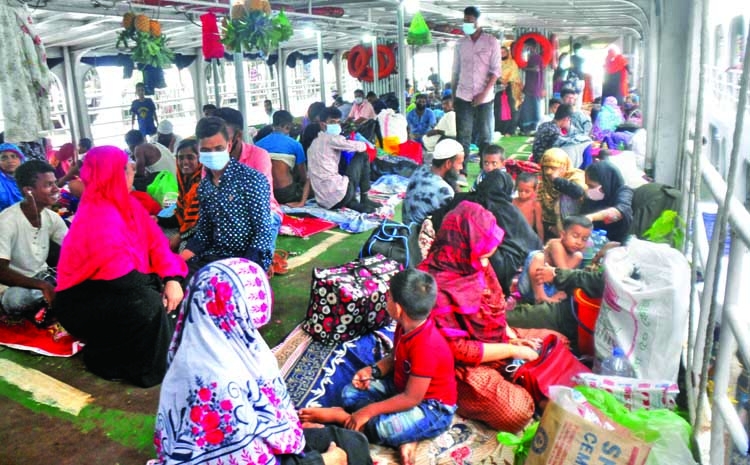 Though the number of deaths and infections due to the COVID-19 is on the rise, people have started leaving the capital to celebrate the Eid-ul-Azha without maintaining physical distance and health rules. The photo was taken from city's Sadarghat on Monda
The deadly novel coronavirus has taken the lives of 37 more people in Bangladesh raising the total to 2,965. In addition, the pathogen has infected 2,772 more individuals too surging the total to 226,225.
With the latest updates, the current death rate stands at 1.31percent and the infection rate reaches 21.56 percent.
Bangladesh is now the 16th worst affected country in the world in terms of the number of cases. The position is just one step ahead of Turkey with 226,100 infections and one step behind Europe's hotspot Italy with 246,286 cases, according to worldometer.info. The Directorate General of Health Services (DGHS) came up with the latest information on the country's situation at the regular health bulletin in the capital on Monday.
Professor Dr Nasima Sultana, additional director general of DGHS addressed the briefing, as she has been doing of late, and said, ''As many as 12,859 samples were tested throughout the country in the past 24 hours. Of them, 2,772 were found to be Covid-19 positive.''

Of the 37 fresh deaths, 26 were male and 11 were female she said adding that 24 were from Dhaka division, five from Chattogram, two from Khulna, three from Rangpur, one from Mymensingh and two were from Barishal division.
As per age categories, one was between 21-30 years old, one within 31-40, seven within 41-50, seven between 51-60, 12 between 61-70, eight within 71-80 and one was between 81-90 years old, said the DGHS official.
Professor Nasima Sultana went on to add, ''A total of 1,801 more patients have made recoveries in the past 24 hours taking the number to 125,683. The recovery rate is now 55.56 percent.''
The deadly Covid-19 has spread to all 64 districts in Bangladesh. The country reported its first case of the virus on March 8 while the first death was recorded on March 18.
The killer virus, which broke out in the Chinese city of Wuhan in December last year, has so far killed at least 652,800 people across the globe. It has infected more than 16,446,000 people in 213 countries and territories plus two international conveyances.
The US is the worst-hit country with at least 149,800 deaths and more than 4,371,000 infections. Brazil has the second highest number of infections with 2,419,000 cases. The country has so far recorded at least 87,000 deaths. India has counted at least 14,40,000 infections and 32,800 deaths. Russia has counted at least 818,000 cases to date and 13,300 deaths.
The UK has counted at last 45,700 deaths, the highest in Europe, followed by Italy with at least 35,100 casualties.
France has lost at least 30,100 people followed by Spain with at least 28,400 fatalities while Iran has counted at least 15,900 fatalities.
Belgium has so far reported more than 9,800 deaths, followed by Germany with no fewer than 9,200 deaths.
Canada has lost at least 8,800 citizens followed by the Netherlands with at least 6,100 casualties. China, the epicenter of the virus, has so far recoded as many as 4,600 fatalities. Pakistan has so far reported at least 5,800 deaths and more than 274,000 infections. Sri Lanka has recorded only 11 deaths and 2,782 infections.
The World Health Organization (WHO) has declared the Covid-19 a pandemic. The outbreak of the virus has brought almost the entire world to a standstill.