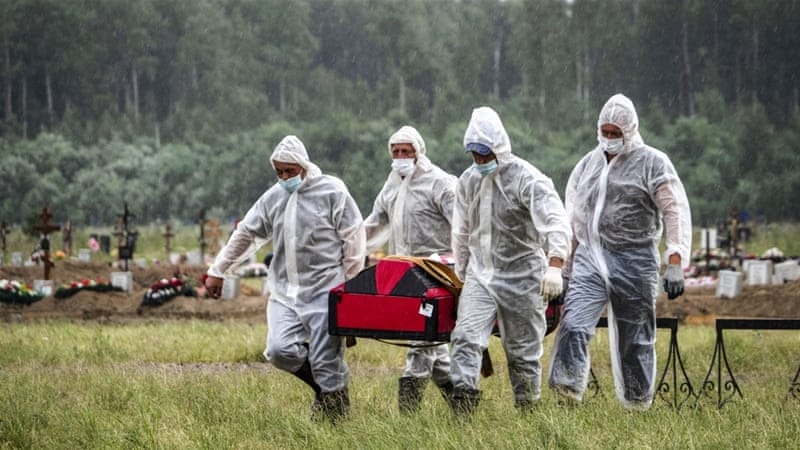 Officials around the world reintroduced a raft of restrictions Monday – from beach closures to quarantine measures – to try to tamp down coronavirus hotspots as the official global death toll passed 650,000.
European countries trying to repair the economic damage caused by the earlier lockdowns struggled to balance keeping the lifeline of tourism open while guarding against new flare-ups of infection.
Spain's tourism industry faced fresh misery after British travelers – and one major tour operator – cancelled flights there following London's decision to reintroduce quarantine for travellers returning from the country.
Hong Kong mandated wearing masks in public in response to a new wave of infections.
Belgium tightened its social distancing measures to try to halt what one expert called a "worrying" surge in cases.
In Washington, meanwhile, the White House announced that another senior administration figure, national security advisor Robert O'Brien, had contracted the virus.
As of Monday evening, the US, the worst-hit nation in the world, had added another 57,000 cases of infection and its recorded death toll stood at 147,588, said Johns Hopkins University.
Until Sunday, the number of US daily infections had exceeded 60,000 for 12 straight days, with some days notching more than 70,000 new cases.
But as the grim figures kept rolling in, the World Health Organization argued against a wholesale closing of borders.
This was "not necessarily a sustainable strategy for the world's economy, for the world's poor, or for anybody else," said WHO emergencies director Michael Ryan.
A "global one-size-fits-all policy" was impossible because outbreaks were developing differently in different countries, he added.
The WHO said its emergency committee would meet later this week to discuss the crisis, six months after the organization declared the pandemic an international public health emergency.
The global death toll from the pandemic passed 650,000 Monday, nearly a third of that number in Europe, according to an AFP tally compiled from official sources at 1600 GMT.
Since emerging in China late last year, the virus has killed a total of 650,011 people – but more than 100,000 deaths have been recorded since July 9, and the global toll has doubled in just over two months.
China reported its highest number of coronavirus cases in three months, part of a worrying swell of infections hitting Asia and Europe.
Indonesia confirmed its 100,000th coronavirus case Monday, as the Red Cross warned that the crisis in the world's fourth most-populous country risked "spiralling out of control."
New infections have also surged in Hong Kong, which for weeks appeared to have infection rates under control.
Now, however, everyone in the densely populated territory must wear masks in public from this week.
"The epidemic situation in Hong Kong is remarkably severe," Chief Secretary Matthew Cheung said as he announced the measure, as well as a ban on more than two people gathering in public and restaurants restricted to serving takeaway meals.
Spain, which has already paid a high cost in human lives and economic losses during the pandemic, suffered a further blow after tour operator TUI cancelled all British holidays to the Spanish mainland from Monday until August 9.
They were reacting to Britain's decision late Saturday to require travelers returning from Spain to quarantine for two weeks.
"There have already been cancellations and more are expected," said Emilio Gallego, secretary general of Spain's hotels association.
"Nobody is going to come here for a week's holiday and then spend 14 days shut away when they get back home."
Irish no-frills airline Ryanair said Monday that it had nosedived into the red in the first quarter, noting that the pandemic had grounded its fleet for nearly four months.
"The past quarter was the most challenging in Ryanair's 35-year history," said a company statement.
Other countries took a different approach to fears over rising infections.
Germany will make coronavirus tests mandatory for travelers returning from risk areas, Health Minister Jens Spahn said Monday.
"We must prevent returning travellers from infecting others unnoticed and thus triggering new chains of infection," Spahn wrote on Twitter.
Belgium announced that from Wednesday, people there would be allowed to see five people at most outside their family circle, reducing the permitted "social bubble" from 15.
The measures came after the country recorded 1,952 new cases over the past week, more than 70 percent up on the previous week.
France ordered night-time curfews for beaches in the Brittany resort of Quiberon on the Atlantic coast, after a fast-spreading COVID-19 cluster emerged there last week.
Tehran warned Iranians against wedding and funeral gatherings as the coronavirus outbreak showed no signs of abating in the Middle East's hardest-hit country.
And Britain launched a campaign against obesity, days after a Public Health England report found that the condition increased the risk of death from coronavirus by 40 percent.
US biotech company Moderna began a final phase of clinical trials for a potential COVID-19 vaccine on Monday – the same day it emerged President Trump's national security advisor Robert O'Brien had contracted the virus.
O'Brien, the most senior US figure so far to come down with the virus, "has been self-isolating and working from a secure location off site," said a White House statement.--AFP