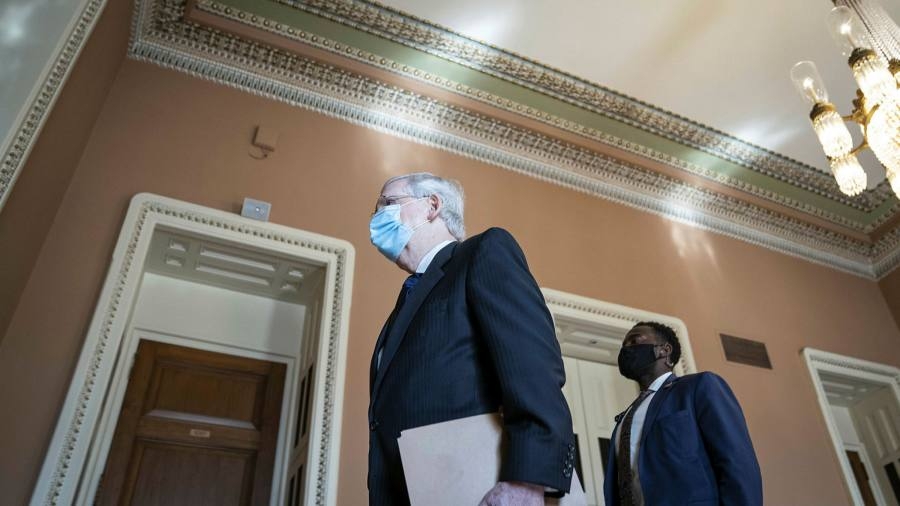 Republicans have proposed spending an additional $1tn (£776bn) to address the economic damage caused by the coronavirus pandemic.
The plan includes $100bn for schools and issuing stimulus payments of up to $1,200 to most Americans.
Under the plan, the payment would replace a $600 boost to unemployment benefits during the pandemic.
The proposal sets the stage for negotiations with Democrats who have called it "totally inadequate".
The US has already spent more than $2.4tn on virus relief measures, sending billions of dollars in aid to businesses and individual households. But economists have warned since the spring that more would be necessary.
Senator Mitch McConnell said Republicans wanted to see how existing programmes were working, but had now produced a "tailored and targeted draft" to address the economic fallout of the pandemic.
The proposal would reduce the $600 weekly unemployment benefit supplement to $200 until states can set up a more targeted system that replaces 70% of a person's previous wage.
The reduction reflects worries that the current benefits discourage workers from returning to work, since an estimated two thirds of recipients are getting more from unemployment than they did working.
Mr McConnell said Republicans "want to continue" the unemployment supplement, which expires this week. "But we have to do it in a way that does not slow down reopening."
As well as money for direct payments to families and to help schools, Republicans said they want to put in place legislation to shield businesses from workers' coronavirus health claims.
What else do Democrats want?
Senator Chuck Schumer, who leads Democrats in the Senate, said the proposal was "too little, too late".
The US has lost roughly 15 million jobs since February and the recovery remains on shaky ground as virus cases rise and some places reimpose restrictions.
Nearly one in five US workers is collecting unemployment benefits and more than half of adults live in households that have seen a drop in income, according to a survey by the US census.
"This is a serious, serious crisis," Mr Schumer said. "We're running out of time."
He said the Republican plan amounted to a "30% pay cut" at a time when most workers do not have jobs to return to and switching to a new system will be near "impossible" for states to execute. He pointed to problems that have plagued the programme so far.
"It will delay benefits for weeks, if not months, as we slide into a greater degree of recession," he said.
Democrats, who have put forward their own $3tn plan, want funding for local governments, which are facing budget shortfalls due to the decline in economic activity. Many object to the unemployment benefit cut, which they want to see extended through to the end of the year.
They have also rejected the proposal to shield businesses from liability.
"What we will not support is what they're saying to essential workers: 'You have to go to work because you're essential, we place no responsibility on your employer to make that workplace safe and if you get sick you have no recourse because we've given your employer protection,'" Congresswoman Nancy Pelosi, the top Democrat in the House of Representatives, said in a recent television interview.
What happens now?
Some Republicans had proposed fast-tracking some pieces of the legislation - an idea rejected by Democrats, who see that strategy as an effort to avoid including their priorities.
Mr McConnell said on Friday he expected the negotiations to take "a few weeks". The senator will also need to persuade members of his own party, who are worried about rising levels of government debt and opposed to further spending.
"The answer to these challenges will not simply be shovelling cash out of Washington. The answer to these challenges will be getting people back to work," Republican Senator Ted Cruz said.