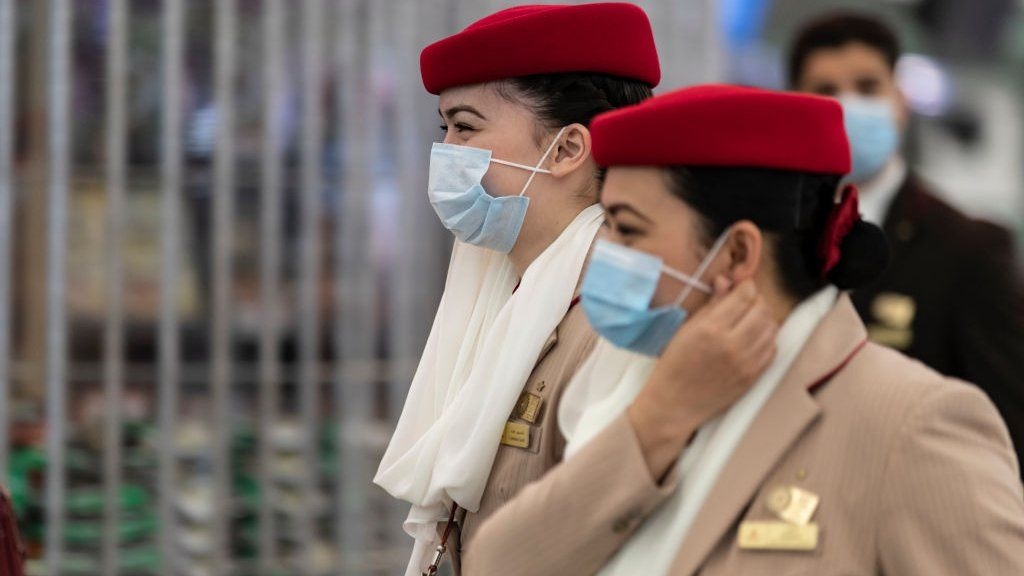 Emirates has become the first airline to offer free Covid-19 insurance as it tries to get people flying again.
Passengers will be covered for medical treatment, hotel quarantine, and even their funeral if they catch the coronavirus while travelling.
The announcement comes as carriers around the world have been hit hard by measures to tackle the pandemic.
Earlier this month, the world's biggest long-haul carrier told the BBC it is set to cut as many as 9,000 jobs.
"We know people are yearning to fly as borders around the world gradually re-open, but they are seeking flexibility and assurances should something unforeseen happen during their travel," Emirates Group Chairman Sheikh Ahmed bin Saeed Al Maktoum said in a statement.
The company said the offer, which is valid for 31 days from the start of a passenger's journey, will be available immediately and run until the end of October.
The coverage is free to all customers regardless of class of travel or destination and is applied automatically with no need to register.
The Dubai-based carrier said the insurance would cover medical expenses of up to €150,000 (£137,000; $176,500).
It will also pay for the cost of quarantining in a hotel for up to two weeks at €100 per day.
In the event of a passenger's death due to Covid-19 the insurance cover will provide €1,500 towards the cost of their funeral.
Fear of flying
Air travel has slumped this year as countries shut their borders and people remain concerned about potentially becoming infected on flights or while travelling.
The cancelation or postponement of major events - including the Olympic Games in Japan, industry conferences and music festivals - has also had a major impact on demand for flights.
Last month the International Air Transport Association (IATA) warned that 2020 will go down as the "worst" on record financially.
The global industry group said the plunge in travel caused by the coronavirus will drive airline losses of more than $84bn (£65bn) this year, as revenues fall by 50% compared to 2019.
The collapse in demand has already forced carriers around the world to cut flights and layoff or furlough tens of thousands of workers.
Less than three weeks ago, the president of Emirates told the BBC that his company is set to cut as many as 9,000 jobs because of the pandemic.
Tim Clark said the airline had already cut a tenth of its staff but said: "We will probably have to let go of a few more, probably up to 15%."
Prior to the crisis, Emirates had 60,000 staff.
It was the first time that the Middle Eastern carrier had disclosed how many jobs it would cut.