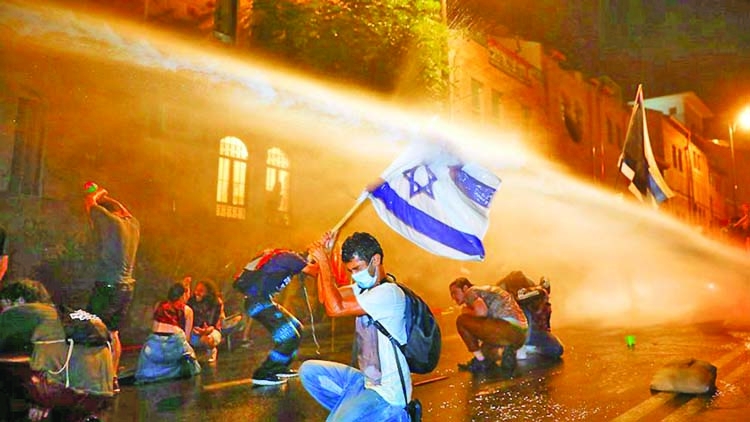 In attending his first-ever public protest, 34-year-old Nimrod Gross arrived with the only prop he felt reflected him - the blue-and-white Israeli flag. The former combat soldier and current tour guide and after-school science teacher had seen his monthly income plunge to around $500 as a result of the harsh economic fallout from the coronavirus. A centrist who shuns politics, but with siblings who supported Prime Minister Benjamin Netanyahu, he sought a unifying symbol to express his despair. Instead, Gross and his flag were pummeled by powerful police water cannons.
Taylor Swift's folklore is a hit - on streaming platforms and also in stores. Republic Records revealed that the surprise album, released July 24, was streamed over 80 million times on Spotify in its first day, the highest first-day streams for a female artist on the platform (80.6 million, to be exact). That's the combined total of streams for all songs on the album in its first day out - and most of Spotify's top 15 all weekend were from folklore. The album also received over 35 million streams on Apple Music, and was the most-streamed pop album on that platform on the day it released. Mashable reached out to Spotify for further context on the album's record performance. Since its debut, folklore has sold over 1.3 million copies. The official music video for "cardigan" has over 24 million views on YouTube. The album has inspired lengthy discourse, including Mashable's own deep dive into whether a single lyric in "mirrorball" might be related to Dashboard Confessional.
ADELE is the British singer who wows with her vocals chords and most recently with her weight loss. The Someone Like You singer has lost seven stone. Adele has been on a weight loss journey of the past year, and reportedly ate a diet of 1,000 calories a day to slim down. She also drank green juice on a daily basis. However, many will be shocked to learn that a certain former British boyband member was key in helping Adele to slim down. Harry Styles, 26, was there to support Adele after her divorce in a manner that helped her shed the weight.
The Miami Marlins canceled their home opener after at least eight players tested positive for Covid-19. Major League Baseball's first matchup to be scrapped due to the virus comes just four games into the truncated 60-game season. The Marlins opened their season on the road against the Philadelphia Phillies. The team delayed its trip back to Miami from Sunday to Monday after pitcher Jose Urena tested positive and missed his scheduled start Sunday. Three other players -- catcher Jorge Alfaro, infielder Garrett Cooper and outfielder Harold Ramirez -- were previously held out of games during the opening series due to positive tests. The cancellation is the latest test of MLB's resolve to play the season in the midst of the pandemic. Delayed testing results beset summer-camp preparations as teams readied for the season's start. Star players such as San Francisco Giants catcher Buster Posey and Los Angeles Dodgers pitcher David Price have opted out of playing the season.