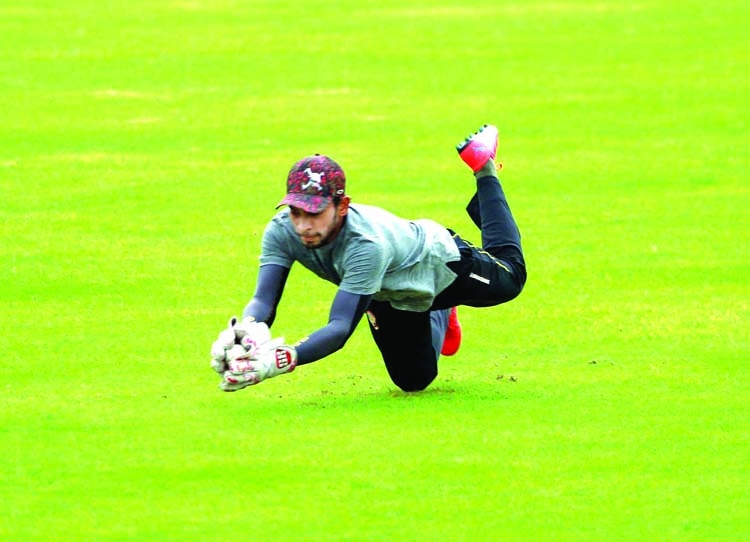 Bangladesh wicket-keeper batsman Mushfiqur Rahim during keeping practice at academy ground of Sher-e-Bangla National Stadium, Dhaka. -BCB
The cricketers who took part in the individual training session arranged by the Bangladesh Cricket Board (BCB) at different venues across the country got a Eid-ul-Adha break after completing the session on Tuesday, report BSS.
Initially designed for eight days, the programme extended for a couple days at the request of the players. BCB however extended the programme only at Sher-e-Bangla National Cricket Stadium in Mirpur. The cricketers will continue the individual training after the Eid break and in that phase some more cricketers are expected to join, said a board official. If the number of players increased, in that case, the BCB might opt for group training. Every group may consist of little number of players initially. At the same time, the BCB is thinking to begin a condition camp as the tour of Sri Lanka for three-match Test series in October could be materialized at any time. After the Eid break, the training programme is likely to be resumed on August 8.
A total of 14 players so far took part in the programme which was held in accordance with the standard health protocol in the aspect of COVID-19 pandemic. As per the players' interest to train outdoor, the Bangladesh Cricket Board (BCB) initiated the move on July 19 with nine players, who started practice individually at four venues- Dhaka, Sylhet, Khulna and Chattogram. The board then added Rajshahi in their list in which Nazmul Hossain Shanto started his practice. Mushfiqur Rahim, Mohammad Mithun, Shafiul Islam, Imrul Kayes, Taskin Ahmed and Mehedi Hasan Rana chose Sher-e-Bangla National Cricket Stadium to have their practice. Later they are accompanied by Anamul Haque Bijoy.
Mehidy Hasan Miraz, Mahedi Hasan and Nurul Hasan Sohan trained at Sheikh Abu Naser Stadium in Khulna, Nasum Ahmed and Syed Khaled Ahmed practiced at Sylhet International Cricket Stadium while Nayeem Hasan trained at Zahur Ahmed Chowdhury Stadium in Chattogram. The players practiced till Sunday with the board's dedicated COVID-19 management team keeping track and observing players' safety issues throughout this period. Later they did practice for two days in SBNCS only.
BCB was initially reluctant to prepare a roadmap for individual training due to the players' health issue in aspect of the spread of the deadly virus despite the fact some of the other cricketing nations already began it in their respective countries. But after a virtual meeting with 35 players, the board decided to begin the individual training that was largely decorated with fitness drill. The bowlers didn't get the chance to bowl as they were left satisfied with just running and doing gym. The batsmen however got the chance to bat but at the bowling machine at indoor facilities.