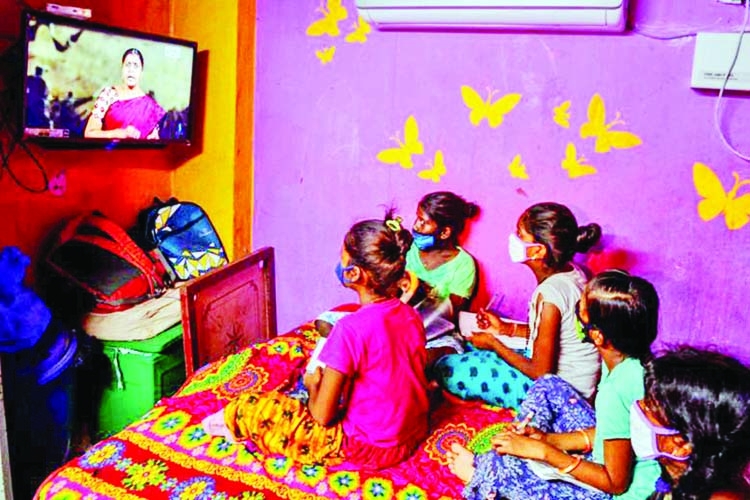 A government guideline for schools suggests less than 30 minutes sessions for pre-primary students. -AFP
Homemaker Neha Gupta has been at her wits end trying to make her three-year-old daughter sit down for her playschool online classes, which last an hour each day. "She doesn't want to sit in front of a laptop unless or until it's a video that her teacher shows... The rest of the time, she is roaming here and there," she said, reports The Straits Times.
She has it a little easier with her five-year-old son, who is in kindergarten and has 40 minutes classes, three days a week. She said her kids are learning but "the attention span is less".
India shut down schools and other educational institutes at the end of March, following a stringent lockdown to tackle the coronavirus pandemic. The lockdown has since been eased but educational institutes have remained shut as coronavirus cases have hit 1.48 million.
As students spend long hours in online lessons, the government on July 14 advised schools to limit online teaching hours and cut down course work for higher classes. A government guideline for schools suggests less than 30 minutes sessions for pre-primary students, who are aged up to six, and not more than two sessions of 30-45 minutes each day for Classes 1 to 8 for children aged six to 14.

And for higher classes not more than four sessions of 30-45 minutes per day. Students are aged 14 to 18 at this level.
"In most of the places (schools), they are trying to convert face-to-face mode of teaching to online stretching from 10am to 4pm or 9am to 3pm... which is not the correct way of doing things," said Prof Hrushikesh Senapaty, director of National Council Of Educational Research and Training, an autonomous body which advises the government on education.
"Our purpose is that students should be engaged and do something on their own. We can guide them or facilitate. "Our purpose is less screen time. Students in elementary or secondary classes - two sessions are enough for guidance and give them a task that they can do on their own. If a teacher will go on delivering a lecture, it will promote rote learning."
In India, which has over 260 million school students, 60 per cent of whom are in government schools, parents place a high premium on education.
Even poorer parents, who have the choice of free government education, often put their children in private school in the hopes of providing a better education for their children.
Improving the quality of education remains an ongoing process in the South Asian country.
As online teaching becomes the new normal, parents, educators and the government are all looking at ways to reduce the burden on children.
"The children are becoming very cranky and irritable. It's a very claustrophobic atmosphere. They cannot play with others in their own age group. It's a very difficult time for children," said Mrs Ameeta Mulla Wattal, principal of Springdales School, Pusa Road, Delhi.
She said that she had culled out material from the different curriculum for students and created online material.
"What we have done is convert our content into research based and personalised learning. From the textbooks, we have gleaned out various chapter and taken out three or four concepts so that we teach them thematically. We do breakaway physical education, yoga and dancing aerobics. It becomes a productive space."
Still the introduction of online teaching as a response to the pandemic has also deepened the divide between well off and poorer students, many of whom don't have access to smartphones or computers.
Ms Protiva Kundu, additional coordinator-research at the Centre for Budget and Governance Accountability, conducted a survey of 155 students between the ages of 5 and 18.
She found that 47 per cent of the children enjoyed learning online for a variety of reasons - including for not having to get ready for school in the morning.
She noted that only 11.5 per cent of the households with children between the ages of 5 and 18 have a computer with an internet connection, while 23 per cent said that they could not use the device for the entire day because it was a single device shared by the whole household. All of them complained of poor connectivity.
While the government has also introduced lessons on radio and television for students who have no online access, not all of the government steps have been universally welcomed.
The Central Board of Secondary Education has decided early this month to cut down course work for Class 11 and 12 students by 30 per cent.
However, the subjects that have been removed have stoked much controversy. Political science materials on federalism, nationalism and secularism, for instance, have been dropped.
"Avoiding formal and academic engagement with these issues would mean depriving future young citizens of the resources to develop critical thinking and a scientific temper, the basic equipment required for citizens in a rapidly changing world," said a petition from academics and intellectuals.