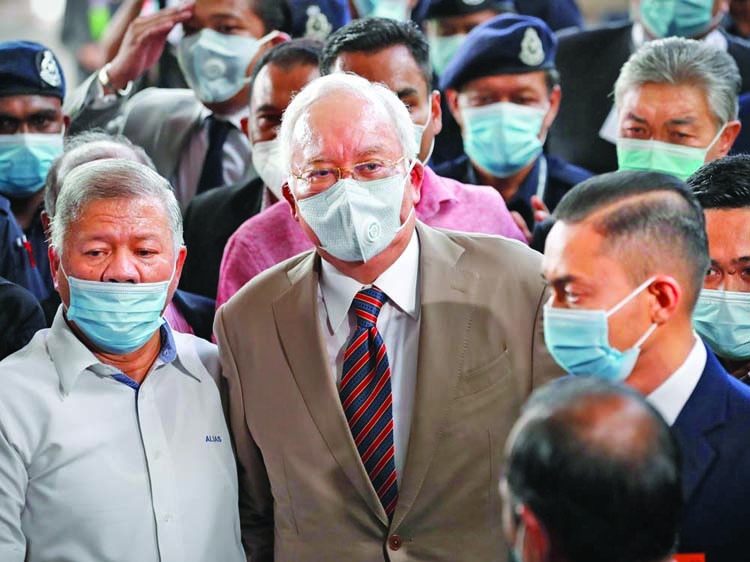 Former Malaysian Prime Minister Najib Razak (center) wearing a face mask with his supporters arrives at courthouse in Kuala Lumpur, Malaysia on Tuesday. -AP
Former Malaysian Prime Minister Najib Razak on Tuesday was sentenced to 12 years in jail and handed a fine of 210 million ringgits ($49.3 million) over his involvement in the now infamous 1MDB scandal.
The 67-year-old was found guilty of all seven charges in the first of his five trials linked to the multi-billion dollar scandal at state fund 1MDB. Najib's lawyers have asked for a stay of execution for the jail sentence.

Questions around the missing money from 1MDB helped contribute to the defeat of the political coalition he led in the 2018 general elections. Najib had allegedly illegally received funds in his personal bank accounts that can be traced to 1MDB.
On Tuesday, the former prime minister was convicted by the Kuala Lumpur High Court on three counts of money laundering, three counts of criminal breach of trust and one count of abuse of power. He had allegedly received nearly $10 million illegally from SRC International - a unit under 1MDB.
High Court judge Mohamad Nazlan Mohamad Ghazali said the prosecution "has successfully proven its case beyond a reasonable doubt."
The court on Tuesday evening announced 10-year jail sentences for each of Najib's three counts of criminal breach of trust as well as the three counts of money laundering, but the judge ordered that they should be served concurrently.
Najib, the country's sixth prime minister, could have seen jail terms of up to 15 or 20 years for each of the charges, Reuters reported previously. He earlier pleaded not guilty, and said he would appeal the guilty verdict.
He faces dozens of other charges in four additional trials also related to the 1MDB scandal.
Najib has remained a member of parliament - having won his seat in the 2018 elections - and is still an influential figure within his party, the United Malaysia National Organisation or UMNO.
In a dramatic turn of events, his party was returned to power in February as part of a political coalition that's different from the one he previously led.
Najib's conviction on Tuesday could reduce his overall presence in the Malaysian political scene, but boost the standing of current Prime Minister Muhyiddin Yassin, said Oh Ei Sun, a senior fellow at a think tank, Singapore Institute of International Affairs.
Before the verdict on Tuesday, Oh told CNBC's "Street Signs Asia" that some Malaysians were not pleased with the settlement amount that Muhyiddin's government reached with U.S. investment bank Goldman Sachs.
Goldman last week agreed to pay $3.9 billion to the Malaysian government for its involvement in the financial dealings of 1MDB.
"So in that sense, I think this series of convictions of Najib Razak perhaps would actually stand the present administration in higher regard as would otherwise," said Oh, who was Najib's political secretary in 2009 to 2011.