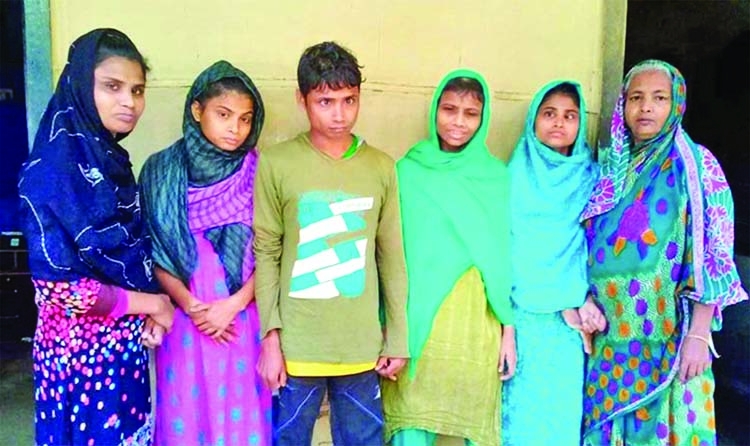 Amtoil is a village under Rampasha union in Bishwanath upazila of Sylhet, where a total of 5,500 people live. It is a matter of sorrow that 350 people in the village, according to upazila social services office, are disabled. Most of them are children.
The rate of people with disabilities in the village is higher than double of the overall rate in Sylhet. When this humanitarian issue came to the notice of Sheikh Rehana, the youngest daughter of Father of the Nation Bangabandhu Sheikh Mujibur Rahman, she informed it to her sister Prime Minister Sheikh Hasina.
In an instant response, Prime Minister Sheikh Hasina has directed the authorities concerned to provide financial aid and gifts for the disabled people of Amtoil village.
Confirming the matter, Prime Minister's deputy press secretary MM Imrul Kayes said, "Bangabandhu's youngest daughter Sheikh Rehana has brought the sufferings of the disabled people in Amtoil village to the light. The prime minister instantly allocated Tk 16,13,500 to give 461 disabled people of Rampasha union Tk 2,500 each and one lungi and one saree for each family."
Besides, the premier has given some directives for the wellness of the people with disabilities in Amtoil village and ensuring a healthy generation.
She has also directed to bring all people with disabilities in the village under the coverage of allowance, to set up specialized schools for the disabled children and provide necessary equipment including wheelchairs, tricycles, hearing and visual devices.
About such a high number of people with physical disabilities in a village, upazila health and family welfare office said that Amtoil is a densely-populated village. People in the village live in an unhygienic condition. Many children are born here with disabilities due to poverty, malnutrition, lack of awareness about maternal and child health. Some children become disabled suffering various diseases after their birth. The birth rate is also high in the village.
UP Chairman Alamgir said, "Marriages with blood relations are widespread in Amtoil village, which may the main reason behind the birth of children with disabilities."