US, Australia seek new military cooperation in face of China 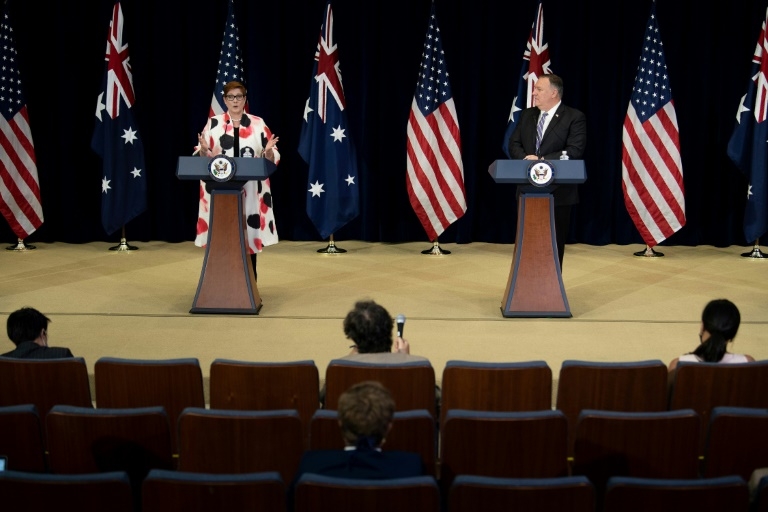 The United States and Australia said Tuesday they will expand military cooperation as tensions soar with China, presenting a common front between the allies.
Going ahead in Washington with annual talks despite the coronavirus pandemic, Australia's foreign and defense ministers offered clear, if more mildly stated, support for a hawkish shift on China by President Donald Trump's administration.
"The United States knows the threats that you and the rest of the free world face. And the United States stands with you in our unbreakable alliance," Secretary of State Mike Pompeo told the Australian ministers during a joint news conference.
US Defense Secretary Mark Esper hailed the participation of five Australian warships last week in exercises with a US carrier strike group and a Japanese destroyer in the Philippine Sea.
"These exercises not only bolster interoperability, but also send a clear signal to Beijing that we will fly, we will sail and we will operate wherever international law allows and defend the rights of our allies and partners to do the same," Esper said.
Australian Defense Minister Linda Reynolds said the two countries will build ties across a slew of defense areas including hypersonic, electronic and space-based warfare.
The cooperation will "strengthen our shared ability to contribute to regional security and to deter malign behavior in our region," she said.
In a joint statement, the ministers said they discussed expanding operations in the northern Australian city of Darwin, where US Marines have been rotating in since 2012 under an initiative of former president Barack Obama.
The United States will establish a military fuel reserve in Darwin and the allies will consider exercises there with like-minded countries – a likely reference to Japan and India.
In one step that had been too far, Australia last year said it would not serve as a base for US intermediate-range missiles – widely seen as a way to target China.
Esper, asked if Australia had warmed to the missiles, said the allies had a "full suite of capabilities and strategies we intend to roll out together in the years ahead."
Pompeo has championed a hard line on China, questioning the half-century US policy of engagement and urging an alliance to confront a "Frankenstein" Beijing.
Despite Australia's reliance on trade with China, Prime Minister Scott Morrison's right-leaning government has largely backed the United States.
Australia has seconded its longtime ally's calls for an international investigation into the origins of COVID-19 and joined Pompeo in rejecting Beijing's sweeping claims in the South China Sea.
Pompeo hailed Morrison for refusing to "bow to Beijing's wishes" after China retaliated by discouraging travel and trade with Australia and was accused of waging cyberattacks against government sites.
Foreign Minister Marise Payne, however, acknowledged that the two nations "don't agree on everything" and stressed the importance of multilateral institutions, after Trump bolted from the World Health Organization.
As the ministers met, China's Foreign Minister Wang Yi – in a phone call with his counterpart from another US ally, France – accused Washington of "reckless provocation of confrontation."
China as well as Trump's domestic critics accuse the US president, who is trailing in polls ahead of November elections, of seizing on China to divert from criticism of his own handling of the pandemic in the United States, which has suffered the highest death toll of any country.
But Trump's presumptive Democratic rival Joe Biden has also vowed a tough approach on China amid wide criticism of the Asian power on issues from trade to its incarceration of Uighur Muslims to its clampdown in semi-autonomous Hong Kong.
Prime Minister Lee Hsien Loong of Singapore, a close US ally that maintains cordial relations with China, said the US relationship with Beijing historically "always gets entangled" in US presidential elections but stabilizes afterward.
"I'm not sure whether it will happen this time because I feel it's quite different," Lee told the Atlantic Council in Washington.
"The degree of animus and, sad to say, bipartisan consensus on treating China as a threat is quite extraordinary and I fear that it may carry over past the election and, if it does, I think that bodes ill for the world."--AFP