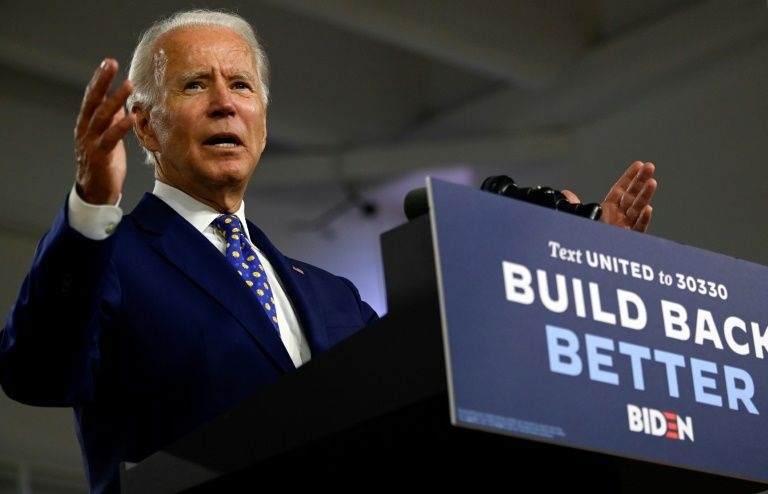 Joe Biden, the presumptive Democratic presidential nominee, said Tuesday that he will pick his running mate next week for the November election against President Donald Trump.
"I'm going to have a choice in the first week in August," Biden told reporters. "And I promise, I'll let you know when I do."
Biden, who has pledged to put a woman on the Democratic ticket, was asked whether he would be able to meet face-to-face with his vice presidential pick because of the coronavirus pandemic.
"We'll see," the 77-year-old former vice president said.
Biden joked that he would have to try to "trick" journalists camping outside his Wilmington home to allow him to meet discreetly with his choice before making an announcement.
Biden's short-list is believed to include California Senator Kamala Harris and Susan Rice, who served as National Security Advisor under president Barack Obama, according to press reports.
Three other senators are also believed to be under consideration – Tammy Duckworth of Illiniois, Elizabeth Warren of Massachusetts and Tammy Baldwin of Wisconsin.
Two other lawmakers are also believed to be in the running – Florida Rep. Val Demings and California Rep. Karen Bass – along with two governors – Michigan's Gretchen Whitmer and New Mexico's Michelle Lujan Grisham – and Atlanta Mayor Keisha Lance Bottoms.
The website Politico issued a graphic following Biden's remarks stating that he had chosen Harris before issuing a correction and saying that it was a mistake due to a "technical error."
The Democratic nominating convention is to begin on August 17 and Biden is expected to announce his choice before then.
Biden also criticized Trump's handling of the coronavirus outbreak, which has left nearly 150,000 people dead in the United States, and the "Black Lives Matter" protests.
"He's shown that he can't beat the pandemic and keep you safe," the Democratic candidate said. "He can't turn the economy around and get America back to work.
"And he is horrifyingly and not surprisingly intentionally stoking the flames of division and racism in this country," he said.
The former vice president said Trump was using federal agents against protestors in a bid to scare voters.
"That is all about trying to come up with a bizarre law and order 2020 campaign theme just to try to scare the devil out of the American people," he said.
"His campaign is failing and he's looking for a political lifeline," Biden said. "This isn't about law and order. It's about a political strategy to revive a failing campaign."
The former vice president was also asked why he's running for the White House.
"I'm running because Trump is the president," he said. "And I think our democracy is at stake for real.
"And what seems to be the case is many Americans – those who don't like me and those who do – view me as the antithesis of Trump. And I believe that I am," he said.--AFP