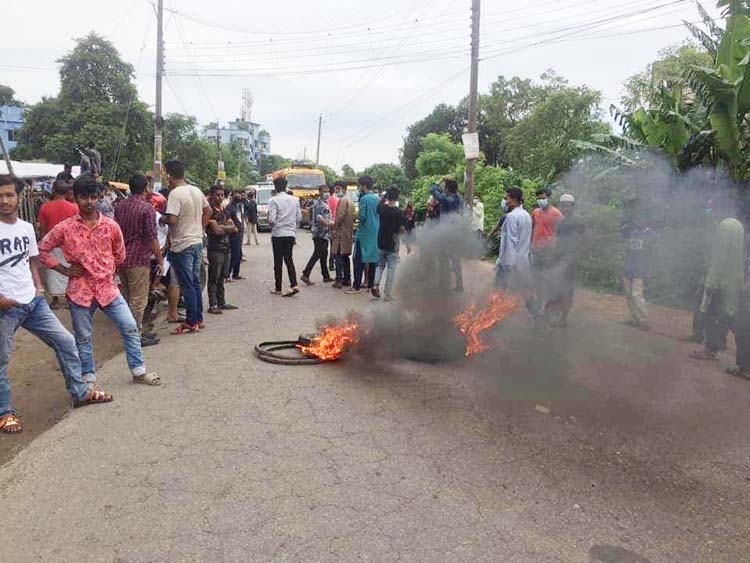 Protesting the arrest of Masum Billah, former president of Chhatra League of Brahmanbaria district unit, activists of the ruling party’s student wing on Wednesday blocked the highways in Brahmanbaria.
The BCL men burned tyres and blockaded the vehicular movement at Ashuganj rail gate, Sarail Bishwa Road intersection, Kuttapara intersection, Chandura on the Dhaka-Sylhet highway and Suhilpur, Ghatura, Pirbari, Medda and Akhaura on the Cumilla-Sylhet highway.
The demonstrators demanded immediate release of the BCL leader and a proper investigation into the matter.
On information, police rushed to the spot and brought the situation under control.
Besides, BCL activists attempted to form a human chain in front of Brahmanbaria Press Club protesting the arrest of their leader. But police foiled the program.
Shahadat Hossain Shuvon, general secretary of Brahmanbaria Chhatra League, said, “Masum Billah is a victim of conspiracy. We seek his immediate release and a fair investigation into the matter.”
AKM Moniruzzaman Chowdhury, officer-in-charge of Khatihata Highway Police Station in Sarail, said, “After hearing the news that some unruly people blocked vehicular movement in front of Kuttapara High School, we rushed to the spot and brought the situation under control.”
Mohammad Selim Uddin, officer-in-charge of Brahmanbaria Sadar Model Police Station, said, “Sarail police arrested former BCL leader Masum Billah on Tuesday for possessing illegal drugs and assaulting police members. Some BCL men tried to form a human chain over the arrest. But we dispersed them.”
AMM Nazmul Ahmed, officer-in-charge of Sarail Police Station, said, “Ex-BCL leader Masum Billah was arrested with phensidyl on Tuesday. He has been sent to the court.”
Assistant Superintendent of Police (Sarail Circle) Md Anisur Rahman said, “When we came to learn that a group of unruly youths blocked the Dhaka-Sylhet highway at Bishwa Road intersection, we rushed to the spot and brought the situation under control dispersing them. Following investigation, legal actions will be taken against those who have tried to create unrest.”
It is mentionable that Masum Billah was arrested in front of Kuttapara High School on the Dhaka-Sylhet highway on Tuesday afternoon with six bottles of contraband drug phensidyl in his possession, according to Sarail police.
Masum Billah allegedly beat up a police officer during the arrest. Two cases have been filed on charge of possessing illegal drugs and assaulting police while discharging their duties, Sarail Police Station sources said.
The arrestee was sent to the court on Wednesday morning.