Atalanta close in on 100 goals with late win at Parma 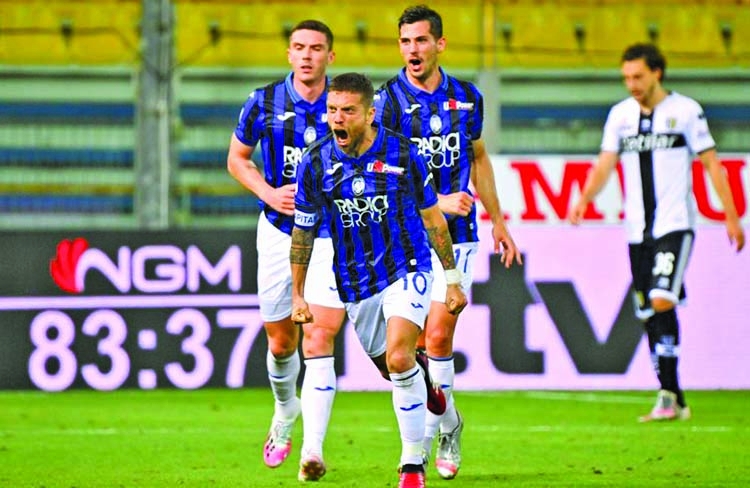 Atalanta's Alejandro Gomez, center, celebrates after he scored his side's first goal during a Seria A match between Parma and Atalanta, at the Ennio Tardini stadium, in Parma, Italy on July 28, 2020. -AP
Free-scoring Atalanta closed in on a 100-goal Serie A tally for this season and extended their unbeaten run to 17 league games when they hit back to win 2-1 at Parma on Tuesday.
Atalanta moved on to 98 goals and need two more in their final game against Inter Milan on Saturday to become the first team to score 100 goals in a season since AC Milan, Inter Milan and Juventus all did so in 1950-51.
Gian Piero Gasperini's side, who face Paris St Germain in their Champions League quarter-final on Aug. 12, are also chasing a best-ever second-place finish. They moved up to second with 78 points, two head of Inter who were hosting Napoli later on Tuesday.
Parma had the better of the first half and went ahead two minutes before the break when Gervinho powered forward and slipped the ball to Dejan Kulusevski. The ball rebounded off a defender and the Swede scored against his former club for his 10th goal of the season.
The visitors were much improved in the second half and Ruslan Malinovskyi levelled in the 70th minute when he fired a free kick straight through the middle of the Parma wall.
Playmaker Alejandro Gomez nutmegged a defender and fired a left-foot shot past Luigi Sepe from outside the area to give Atalanta the points in the 83rd minute.
--- Reuters, Parma