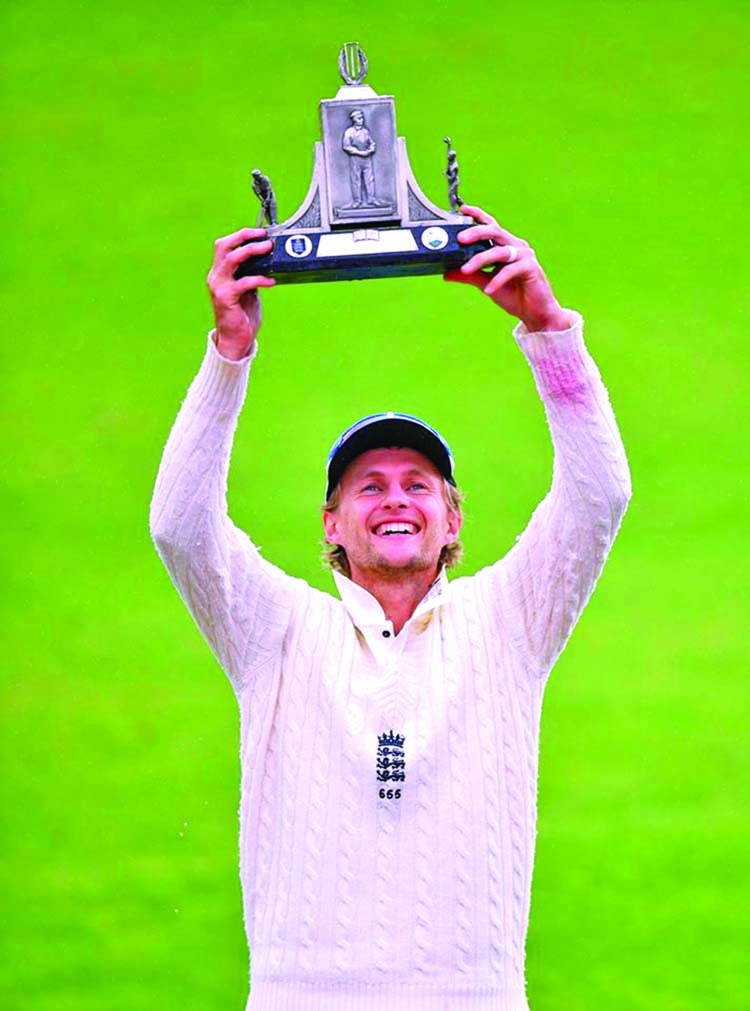 England's Joe Root celebrates their series victory with the Wisden Trophy. -Getty
England captain Joe Root said he had no qualms about having bowling "headaches" leading up to next week's first Test against Pakistan after his side's 2-1 series win over the West Indies.
Root's men came from behind to regain the Wisden Trophy, with a comprehensive 269-run victory in the third Test at Old Trafford on Tuesday sealing the hosts' fightback.
England, in the first major series since the coronavirus lockdown, rotated their fast bowlers throughout the three-match campaign. Having controversially left out Stuart Broad from their four-wicket loss in the opener at Southampton, they saw the veteran seamer return for the next two matches, with the 34-year-old becoming just the seventh bowler to take 500 Test wickets when he reached the landmark on Tuesday.
England will return to Manchester for the opening match in their three-Test series against Pakistan, with the selectors having to decide whether the likes of Broad, Chris Woakes, veteran spearhead James Anderson, England's all-time leading Test wicket-taker, and express quick Jofra Archer should be retained or to instead freshen up the attack with the rested pair of Mark Wood and Sam Curran.
Broad was the leading bowler on either side in the West Indies series, with 16 wickets at a miserly average of 10.93, while Woakes took 5-50 on Tuesday. "As we've seen it's hard to leave anyone out - just look at the players that haven't played this game," said Root.
"With the talent that's waiting in the wings it's an exciting place to be and long may those headaches continue."
But after several weeks in a bio-secure environment, Root urged his players to make the most of their short break.
"I think for now it's just important that everyone just goes away, has some time away from cricket, away from this bubble and tries not to think about things for a couple of days," he said.
"Towards the back end of the week we'll start getting our heads around the challenges that the next three games will pose for us," the Yorkshire batsman added.
"It's vitally important that the guys enjoy the next four or five days and really make the most of that time away, time at home with loved ones."We've all been very excited about getting home and spending that time refreshing and getting away, so hopefully when we all come back we'll be ready to crack on with another very exciting series."