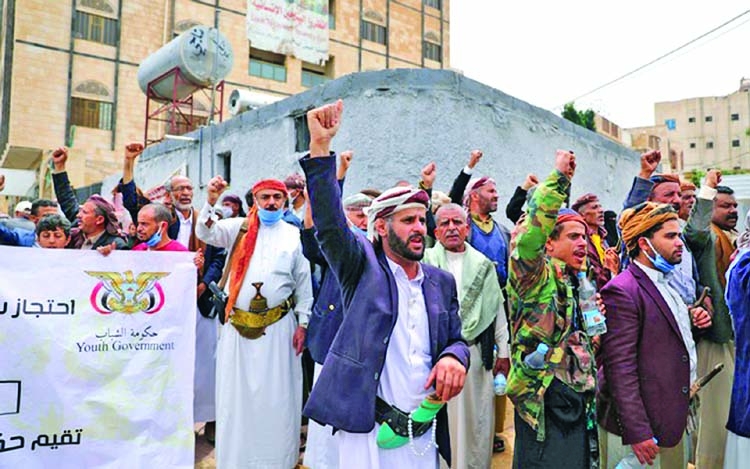 Houthis shout slogans as they gather outside the United Nations offices to denounce the Saudi-led coalition's blockade, in Sanaa, Yemen July 5, 2020. -Reuters
Under the resolution, Yemen's Southern Transitional Council (STC) would rescind self rule, implement the Riyadh agreement and appoint a governor for Aden, said the statement on Wednesday.
Yemen's prime minister would form a government within 30 days from both northern and southern Yemen, it said.
Shortly after the Saudi Press Agency (SPA) report, STC spokesman Nizar Haitham tweeted that his group would abandon self-administration.
"The consent of the Yemeni parties to accelerate the implementation of the agreement reflects the serious desire for dialogue...and supporting paths of a comprehensive pol. solution to end the crisis," Saudi Arabia's vice minister of defences Khalid bin Salman tweeted, reports Reuters.
A Saudi-brokered deal last November, called the "Riyadh agreement", was negotiated in response to a southern separatist takeover of Aden city, the de facto headquarters of the internationally recognised Yemeni government.

The "Riyadh agreement", which aimed to centralise all military factions and form a government made up equally between the north and south, was never implemented.
Yemen has been mired in conflict since the Iran-allied Houthi group ousted the government from the capital Sanaa in 2014. A Saudi-led military coalition in 2015 intervened in a bid to restore the government.
The UN has been holding virtual talks between the warring parties to agree to a permanent ceasefire and confidence-building steps to restart peace negotiations last held in December 2018.
The UN's Yemen envoy Martin Griffiths on Tuesday said that after four months of negotiations, no final text has been agreed and warned that the window of opportunity was not indefinite.
"I don't want today to sugar coat things. There is a real risk that these negotiations will slip away, and that Yemen will enter a new phase of prolonged escalation, of the uncontrolled spread of Covid-19, and of severe and threatening economic decline," he told the UN Security Council.