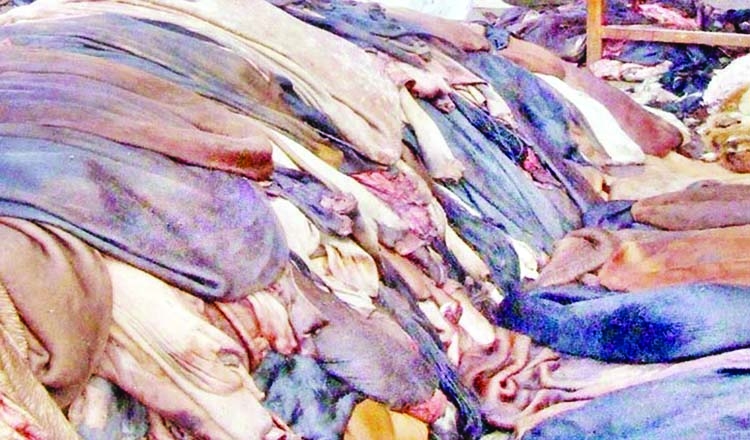 The government has decided to allow traders to export rawhide and wet blue hide as part of efforts to keep supply and demand stable after cattle slaughtering during Eid-ul-Azha.
It announced the decision on Wednesday following recommendations by a taskforce formed to develop the leather sector and a commerce ministry committee.
Officials held a meeting at the Prime Minister's Office on the issue on Jul 20 and discussed it with the stakeholders as well. It appeared that relaxation of the export rules was required to keep the market stable, the commerce ministry said in a notice. The new decision will remain effective until further notice.
Half the cattle slaughtered in Bangladesh throughout the year are sacrificed during Eid-ul-Azha. Wholesalers buy the rawhide and skin of sacrificial animals from seasonal traders and sell these to tanners. Every year, the government determines the prices of rawhide for tanners ahead of the Eid.
This year, tanners will have to buy cowhide at Tk 35 to Tk 40 per square foot in Dhaka and Tk 28 to Tk 32 per square foot elsewhere. The price of goat hide has been set between Tk 10 and Tk 15 per square foot across Bangladesh.
In the last season of animal sacrificing, piles of thousands of rawhides were left to rot in the streets after the merchants declined to buy the rawhides from seasonal traders or offered meagre prices following a dispute with the tanners over dues. The tanners, however, accused the merchants of market manipulation.
The tanners have expressed worries that they may not be able to buy hides from the merchants during the Eid this year because their stocks have not been exhausted yet amid the slump in export.
According to the Export Promotion Bureau, $1 billion worth of leather and leather products were exported in FY 2018-19 but the figure fell down to $797 million in FY 2019-20 mostly due to the coronavirus crisis that began early this year.