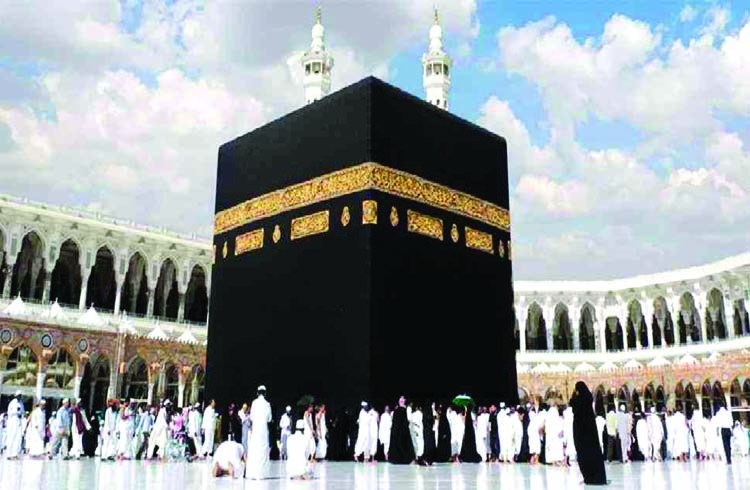 About 1,000 pilgrims arrived on the Mina Valley outside Makkah on Wednesday to participate in this year's Hajj to be held on Thursday amid the coronavirus pandemic.
This time, the Saudi government has imposed restrictions to curb the spread of the virus which brought the global economy to its knees and force closure of businesses and places of worships across the world. Hajj rituals begin with the Day of Tarwiyah (fetching water) and there are no major rituals, so the pilgrims will spend their time praying and reflecting until sunrise on Thursday, reports Arab News.
Some 2.5 million pilgrims can be accommodated in Mina, 7km northeast of the Grand Mosque in Makkah and it would normally be the site of the world's largest tent city.
But coronavirus-related restrictions mean that this year pilgrims from among Saudis or expatriates who live in the Kingdom can perform Hajj.
Those who will participate in this year's Hajj were placed in quarantine after checking temperature as they began to arrive in Makkah. Health workers sanitised their luggage.
Health and safety staff with disinfectant cleaned the area around the Kaaba, the structure at the centre of the Grand Mosque toward which Muslims around the world pray.
As a precaution, hajj authorities have cordoned the Kaaba, and pilgrims will not be allowed to touch it, to limit the chances of infection.
Besides, dedicated health centres, mobile clinics and ambulances to care for the pilgrims have been arranged. The pilgrims have to wear masks and observe social distancing.
All pilgrims were required to be tested for coronavirus before they arrived in Makkah and they will be quarantined after the pilgrimage.
They were given amenity kits including sterilised pebbles for the Jamarat stoning ritual, disinfectants, masks, a prayer rug and the ihram, the seamless white garment worn by pilgrims.
On Thursday, the pilgrims will travel to Arafat to listen to the sermon, the pinnacle of Hajj. Then they will go to Muzdalifah and stay overnight before returning to Mina for the Jamarat ritual.
Zelkin, an Azerbaijani pilgrim who lives and works in Jubail, is among those who have been granted the opportunity to perform Hajj this year.
"It's really hard to make this kind of arrangement in such a short time amid the pandemic. I couldn't believe this (getting chance to perform Hajj). It's a once-in-a-life-time opportunity. It's not my luck, it's Allah's will and you should follow His will," he said.