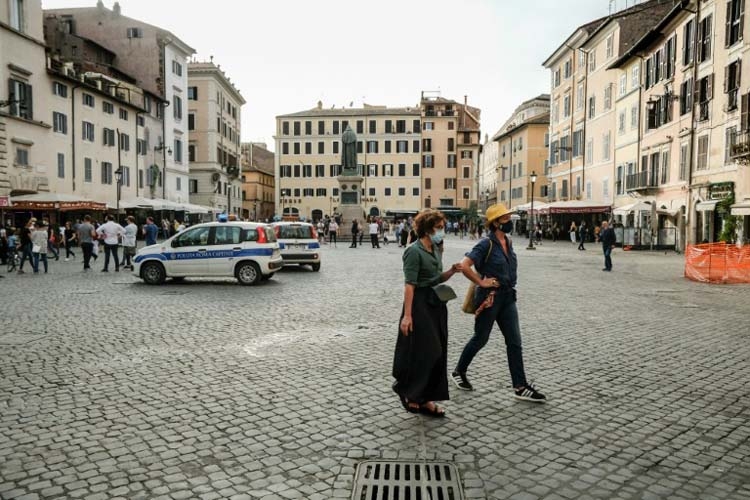 World Health Organization officials said. More cases are now being reported [in Europe] every day than were reported in China at the height of its epidemic," WHO Director-General Dr. Tedros Adhanom Ghebreyesus said at a news conference at the organization's Geneva headquarters. WHO officials declared COVID-19 a global pandemic recently as the virus spreads rapidly across the world from Asia to Europe, the Middle East and now parts of the United States. When the virus is out there, the population has no immunity and no therapy exists, then 60% to 70% of the population will be infected," German Chancellor Angela Merkel told a news conference in Berlin, according to Reuters. The country has a population of more than 82 million.
Emerging from Wuhan, China, less than three months ago, the virus has spread to more than 132,000 people across 123 countries and territories with 5,000 people dead, WHO officials said. The number of new cases in China has slowed to a trickle, with 26 new cases reported Thursday, according to WHO data, while cases in Europe have exploded. China has certainly peaked and there is certainly a decline but there's always a chance" that could rise again, said Dr. Maria Van Kerkhove, head of WHO's emerging diseases and zoonosis unit. World Health Organization (WHO) Director-General Tedros Adhanom Ghebreyesus gestures during a press briefing on evolution of new coronavirus epidemic on January 29, 2020 in Geneva.

Italy currently has the most cases outside of China with at least 15,113 infections, followed by Spain at 4,334, Germany at 3,156 and France at 2,882, according to data compiled by Johns Hopkins University. Other countries in Europe are seeing cases soar. Switzerland currently has 1,125 cases, followed by Sweden at 809, the Netherlands at 804 and Denmark at 788. The United States had at least 1,701 cases as of Friday morning, according to Hopkins. President Donald Trump announced a ban on travel from Europe earlier this week.
The ban excludes some countries and will be in effect for the next 30 days. Tedros said countries need to take a comprehensive approach to try to fight the pandemic. Not testing alone, not contact tracing alone, not quarantine alone, not social distancing alone, do it all," he said. Any country that looks at the experience of other countries with large epidemics and thinks that won't happen to us is making a deadly mistake, it can happen to any country. Social distancing only slightly "slows down the virus so your health system can cope," said Dr.  Mike Ryan, executive director of WHO's health emergencies program.
The virus will always get you if you don't move quickly," Ryan said, discussing lessons health officials learned from the Ebola outbreak. The COVID-19 outbreak in the United States has the potential to exceed that in Europe, the World Health Organization (WHO) said Tuesday as the number of reported US cases surges.

The pandemic began in China in December but the epicenter has since shifted from Asia to Europe. WHO spokeswoman Margaret Harris told reporters during a virtual press conference that 85 percent of the new cases reported to the global body overnight had come from Europe and the United States, now the two "main drivers of the outbreak."
The latest WHO coronavirus daily situation report published late Monday, before the overnight figures showed that Europe reported 20,131 new cases in the preceding 24 hours, while the United States reported 16,354, more than doubling its total caseload. Asked whether the United States could overtake Europe as the epicenter of COVID-19, Harris said: We are now seeing a very large acceleration in the number of cases from the US, so it does have that potential. We cannot say that that is the case yet but it does have that potential. They have a very large outbreak and an outbreak increasing in intensity."
Each individual infecting two to three other people takes about three to five days, so we're seeing what happened three or four days ago, or five days ago in many countries," Harris explained. The numbers show that in the United States, a week ago there was a lot of transmission. Despite the surging case numbers, Harris said there were also some very big positives emerging from America.
Testing is being ramped up; there are more efforts to isolate, care for every confirmed case and trace and quarantine people,

Louisiana Governor John Bel Edwards said New Orleans would be out of ventilators by 2 April and potentially out of bed space by 7 April if we don't flatten the infection curve soon. It's not conjecture, it's not some flimsy theory," Edwards told a press conference. This is what is going to happen. About 80% of Louisiana's intensive care patients are now on breathing machines, up from the normal rate of 30-40%, said Warner Thomas, chief executive of Ochsner Health System, the state's hospital group.Scarcities of protective masks, gloves, gowns and eyewear for doctors and nurses reports abound of healthcare workers recycling old face masks, making their own or even using trash bags to shield themselves have emerged as a national problem.
Our nurses across the country do not have the personal protective equipment that is necessary to care for COVID patients, or any of their patients," Bonnie Castillo, head of the largest US nurses union, National Nurses United, told MSNBC. In an ominous milestone for the United States as a whole, at least 82,153 people nationwide were infected as of Thursday, according to a Reuters tally from state and local public health agencies. China, where the global pandemic emerged late last year, had the second highest number of cases, 81,285, followed by Italy with 80,539. At least 1,204 Americans have died from COVID-19, which has proven especially dangerous to the elderly and people with underlying chronic health conditions, Reuters' tally showed.

For New York state, Cuomo said a key goal was rapidly to expand the number of available hospital beds from 53,000 to 140,000. New York hospitals were racing to comply with Cuomo's directive to increase capacity by at least 50%. At Mount Sinai Hospital's Upper East Side location, rooms were being constructed within an atrium to open up more space for beds. At Elmhurst Hospital in New York's borough of Queens, about a hundred people, many wearing masks with their hoods pulled up, lined up behind barriers outside the emergency room entrance, waiting to enter a tent to be screened for the coronavirus. Not only that, desperate to slow virus transmissions by limiting physical contact among people, state and local governments have issued stay-at-home orders covering about half the US population. A major side effect has been the strangulation of the economy, and a wave of layoffs.The US Labor Department reported Thursday the number of Americans filing claims for unemployment benefits last week soared to a record of nearly 3.28 million almost five times the previous weekly peak of 695,000 during the 1982 recession.

The writer is a columnist.