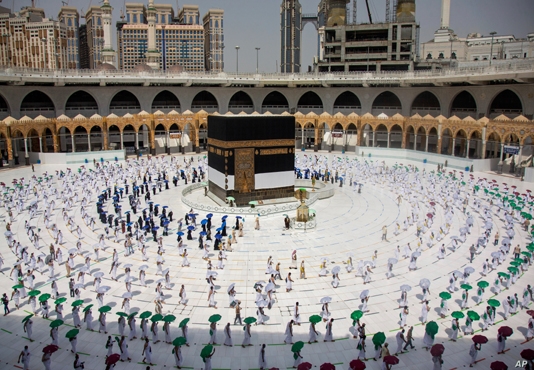 Mask-clad Muslims began the hajj on Wednesday, circling Islam’s holiest site along socially distanced paths in the smallest pilgrimage in modern history as the Saudi hosts strive to prevent a coronavirus outbreak.
The hajj, one of the five pillars of Islam and a must for able-bodied Muslims at least once in their lifetime, is usually one of the world’s largest religious gatherings.
But only up to 10,000 people already residing in the kingdom will participate in this year’s ritual, compared with 2019’s gathering of some 2.5 million from around the world.
Pilgrims walked into Makkah’s Grand Mosque to begin the ritual with their first “tawaf”, the circumambulation of the Kaaba, a large cubic structure draped in gold-embroidered black cloth, towards which Muslims around the world pray.
They were brought in small batches, walking along paths marked on the floor, in sharp contrast to the normal sea of humanity that swirls around the Kaaba during hajj.
“This is an indescribable feeling,” said Mohamed Ibrahim, a 43-year-old Egyptian electrician who was among this year’s pilgrims.
“It feels like a dream,” the father-of-three, who lives in nearby Medina, told AFP by phone before entering the mosque.
The tawaf, which involves walking around the structure seven times, was completed in “record time”, a security commander told state media.
The pilgrims travelled later Wednesday to Mina, another district of Makkah where they will spend the night. It sits in a narrow valley surrounded by rocky mountains, and is transformed each year into a vast encampment for pilgrims.
Worshippers will on Thursday climb Mount Arafat, also known as the “Mount of Mercy”, for hours of prayers and Koranic recitals.
After descending the following day, they will gather pebbles and perform the symbolic “stoning of the devil”.
Foreign journalists were barred from this year’s hajj, usually a huge global media event.
– ‘Danger of pandemic’ –
In a sign that its strict measures were working, the health ministry reported no coronavirus cases in the holy sites on Wednesday, although 122 cases were reported in Makkah.
The pilgrims, who have all been tested for the virus, are required to wear masks and observe social distancing during the rites completed over five days in the holy city of Makkah and its surroundings.
The pilgrims said they were given ihram, the traditional seamless white hajj garment, made from a bacteria-resistant material.
Those selected to take part were subject to temperature checks and placed in quarantine as they began trickling into Mecca at the weekend.
State media showed health workers sanitising their luggage, and some pilgrims reported being given electronic wristbands to allow authorities to monitor their whereabouts.
Workers clutching brooms and disinfectant were seen cleaning the area around the Kaaba. One worker used his bare hands to daub its outer wall with perfume.
Authorities have cordoned off the Kaaba this year, saying pilgrims will be barred from touching it, to limit the chances of infection.
Saudi authorities also reported setting up multiple health facilities, mobile clinics and ambulances to cater to the pilgrims.
“There are no security-related concerns in this pilgrimage, but (downsizing) is to protect pilgrims from the danger of the pandemic,” said Saudi Arabia’s director of public security, Khalid bin Qarar Al-Harbi.
Saudi authorities initially said only around 1,000 pilgrims residing in the kingdom would be permitted for the hajj, but local media reports say as many as 10,000 will be allowed to take part.
Some 70 percent of the pilgrims are foreigners residing in the kingdom, while the rest are Saudi citizens, authorities said.
– ‘Blessed’ –
All those attending the pilgrimage will also have to quarantine afterwards.
The number of COVID-19 cases in the kingdom has surpassed 270,000, with over 2,800 deaths, one of the largest outbreaks in the Middle East.
They were given elaborate amenity kits that include sterilised pebbles for the stoning ritual, disinfectants, masks and a prayer rug, according to a hajj ministry document.
Ayatollah Ali Khamenei, the supreme leader of Saudi Arabia’s arch-nemesis Iran, tweeted Wednesday that Muslims felt “sorrow and grief” about being far away from the Kaaba.
“Hearts feel lonely due to the (Kaaba’s) isolation,” he said.
The Saudi ministry said foreign residents of the kingdom from around 160 countries competed in the online selection process, but it did not say how many people applied.
Some disappointed applicants have complained that the government-run lottery was not clearly outlined and that no reason was given for their rejection.
But Hajj Minister Mohammad Benten insisted the process was transparent, telling the Saudi-owned Al-Arabiya television that “health determinants” formed the basis of selection.