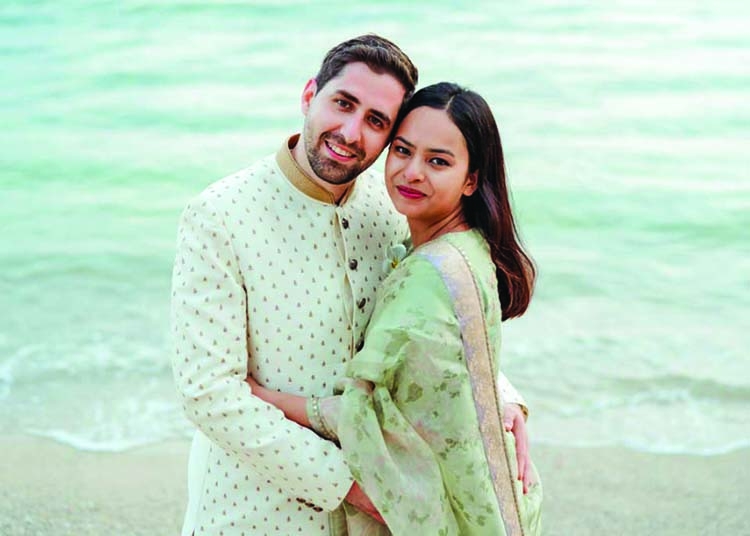 "We met 4 years ago through common friends. We barely spoke, but before leaving he said, 'It would be great to get your number.' A week later, he texted- 'Hi, see you in the evening at Casa Iberica.' My stomach flipped and I thought why not, I'm single!  On our first date, we spoke about our love for travelling and quizzed each other on capitals! He walked me home and leaned in to kiss me, but I put my hand out instead. He kissed my hand- it was awkward but hilarious! We went on more dates after with no 'label'. A few months later, at a friend's wedding, we got drunk and jumped into the pool. When we got out, he hugged me and said 'I love you so much.' I said, 'I love you too'- I felt strongly for him.
After, we were eating lunch at his place when he said, 'Do you think 2 people would fit in this flat?' It took me the entire afternoon to realise that he was asking me to move in! 3 months later when I did, he welcomed me home with orchids! We spent the next few months going on trips and partying with friends. Some nights, we'd just sit on the floor and drink wine. We then planned a trip to Agra- it was his first time in India. But I had to cancel the trip because he fell sick. When we were in our hotel in Jodhpur, he knelt and asked me to marry him. I just screamed, 'Yes!'
Later I found out he'd planned a proposal in Agra- I felt bad for cancelling, but I didn't care about the proposal; I was excited to marry him. We'd already met each other's parents, and they loved us together. So we planned an Indo-Italian wedding. But a week before the wedding, when we were in India, the pandemic hit and we had to cancel. We couldn't fly back to Italy so we went to Thailand instead. When we arrived, we saw a setup for another wedding. In that instant, we knew we didn't want to wait and decided to get married right away! Luckily we'd packed our wedding clothes to take back home! (excerpt)
Humans of Bombay, Fb