DIFF to come back for 19th edition 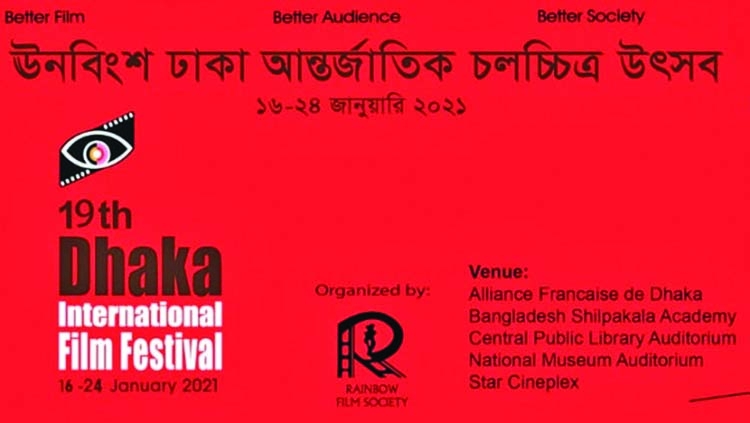 The Dhaka International Film Festival (DIFF) will be back for its 19th edition which is great news for the film-makers and film enthusiasts of the country, amid the uncertainty of the Covid-19 pandemic.
The prestigious film festival will take place from January 16 to 24, 2021 in five venues of the capital city.
Just like the previous years, the festival will take place at the five different venues which are: Central Public Library, National Museum, Alliance Franchise de Dhaka, Bangladesh Shilpakala Academy and Star Cineplex.
Ahmed MuztabaZamal the festival director confirmed the news."Depending on the on-going Covid-19 situation we will take further decision in which case the festival will be held both physically and virtually," said Ahmed MuztabaZamal.
The festival will also arrange online screenings sessions. Movie lovers will have to register in order to watch the films virtually. All films will have to be submitted before September 30. Details information can be found on the official website of DIFF.
"This year, due to the pandemic, many prestigious and big film festivals like the Cannes Film Festival, Shanghai Film Festival, among others, were held online."
"If the situation does not improve, we will hold the festival following Covid-19 health protocols and there will be fewer international delegates this year."
"We will have to wait until November to see what happens and make the final calls," added Ahmed MuztabaZamal.
The 7th Women in Cinema Conference and 3rd West Meets East programs will also be held as a part of the festival. Organized by Rainbow Film Society the Dhaka International Film Festival (DIFF) brings together film-makers, critics, and film lovers from all over the world, under one roof in Bangladesh and the capital becomes an epitome of better films. Rainbow Film Society has been organizing the festival since 1992, with the theme 'Better Film, Better Audience and Better Society.' Ahmed MuztabaZamal, is the president of Rainbow Film Society.